Conan Doyle did not believe a punch killed Houdini 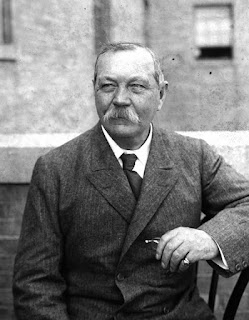 Today marks the 93rd anniversary of Houdini being punched in the stomach by J. Gordon Whitehead in the dressing room of the Princess Theater in Montreal. Even though Houdini's doctors concluded that his fatal appendicitis was caused by the blows, today many question that diagnosis, thinking Houdini must have been suffering from the disease prior to the incident on October 22. The debate continues.

Recently I was surprised to discover that Sir Arthur Conan Doyle offered up his own medical opinion in a 1929 letter to Houdini biographer Harold Kellock:

"Now, I will take what you say about Houdini's death. So far as the prophecy goes, what the cause of the death was is quite immaterial. My remark about the alleged cause being probably apocryphal is due to the fact that, as a doctor, I should not think it possible that gangrene of the appendix could result from an outside blow of the fist. If so, one would expect many of our boxers to die in that way, since such blows are common. I have no doubt at all that Houdini died as the doctors said, but what the cause of the gangrene was is quite another matter. However, as I say, the cause of the death is immaterial. What is material is that the prophecies were fulfilled."


The prophecies Doyle is referring to were those predictions from mediums who claimed Houdini's denouncement of the supernatural while being supernatural himself (or so Doyle believed) were angering the spirits and would bring about his "doom." So Conan Doyle did believe that.

For more punch talk on this Punch Day, check out the links below.