Did Houdini see his mother's ghost? 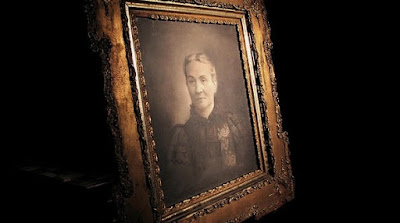 Here's a new story to conclude our special Halloween week of GHOST POSTS. I don't believe this is mentioned in any biography, and it's pretty wild. Did Houdini see his mother's ghost at the time of her death?

The following comes from the 1932 book Houdini and Conan Doyle: The Story of a Strange Friendship by Bernard M.L. Ernst and Hereward Carrington.

It is true that certain odd incidents occurred in his life, but these he was always inclined to "explain away" by that blessed word—coincidence! Thus, he narrated to the editors of this book how he saw a vivid apparition of his mother, the very night she died—he being in Germany at the time, and she in New York. (He was quite unaware of her illness.) This he acknowledged as really happening, but he put it down to coincidence—quite ignoring the fact that "coincidences" of the type had long since been mathematically proved far too numerous to account for in this manner.


Bernard Ernst was Houdini lawyer and close confidant and can be considered a trusted source. (Carrington less so.) So if Ernst says Houdini said this, then Houdini said this! What I wouldn't give to learn more details.

Hope you enjoyed my week of GHOST POSTS. Yes, this was a gimmick, but as you can see below, Houdini himself understood that the power of the word "Ghosts" to get ones attention. Especially on Halloween. 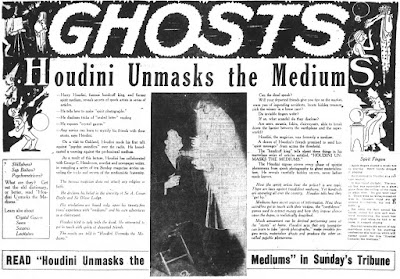 Remembering
HARRY HOUDINI
on the
93rd ANNIVERSARY
OF HIS DEATH
October 31, 1926