The Last Act of Harry Houdini

The Company O Theatre and The Cockpit in London will present a new play, The Last Act of Harry Houdini, from October 29 to November 2. The play is written and performed by Barry Killerby and directed by Ishwar Maharaj. It is part of the "Festival of Brexit: Inside a Mass Hallucination". 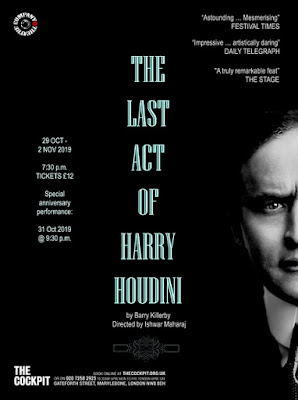 Ten days later, he was dead.

Harry Houdini was a poor Hungarian Jewish immigrant who rose through the Vaudeville theatre circuit to become the greatest showman of the early twentieth century. If he was a pioneer of magic and illusion onstage, off stage he was a force of nature: an aviator in the first days of flight; a movie idol at the birth of cinema and the scourge of the new Church of Spiritualism.

It was his extraordinary private life that sealed his fate.

In this highly acclaimed production, the Master Magician is forced to confront his obsessions with asylums and dance halls, movies and seances until finally revealing confidential show business secrets and the real motivation behind his death defying career.

Somewhere, in this last act, is the answer to what killed the greatest escapologist of all time.


For more details and to buy tickets visit The Cockpit website.