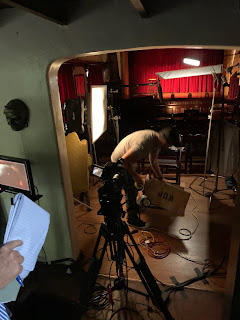 Yesterday I had the pleasure of doing an interview about Houdini for an upcoming episode of The UnXplained. But the real thrill was that we did the interview at Brookledge in Hancock Park which afforded me my first visit to this historic magic location.

Brookledge was the home of magic manufacturer Floyd Thayer who built an adjoining showroom, workshop, and theatre that became known as the Thayer Magic Studio. In the 1930s it was a popular gathering place for magicians from all over the world. In 1942 Thayer sold Brookledge to the Larsen family and it continued to be a gathering place for magicians (yes, a place even more "inside" than the very inside Magic Castle). In 2009 Erika Larsen re-opened the theatre and studio as an invitation-only venue for variety arts performances known as the Brookledge Follies.

I didn't have a chance to see too much, but what I did see blew my mind. The walls are festooned with magic history that appears frozen in time. When I first entered I instantly spotted an original photo of Jacob Hyman in shackles that could have been put there by Hyman himself.

After the interview I had the pleasure of chatting with Erika who informed me Bess Houdini was a frequent visitor to Brookledge. She directed me to the below photo of Bess in same room where I have just done my interview. To think I had been sitting and talking about Houdini in a room where Bess Houdini once sat and may have reminisced herself. Now that's magic! 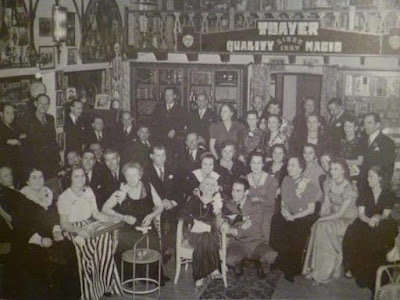 You can read more about Brookledge at the Huffington Post and LA Times.