Have an ENCOUNTER with Houdini in Chattanooga

"Paranormal magician" Zeke Powerz will host a special Houdini Halloween event at the historic Read House Hotel in downtown Chattanooga. Not only will Zeke hold a seance, but he promises "artifacts that were owned and used by the late Houdini" will be on display. Below is the full press release: 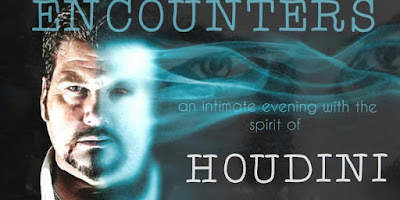 The intrigue of Harry Houdini has continued to persist throughout the world well after his death. On October 31, 2019, paranormal magician Zeke Powerz will be looking to contact Houdini and reach him well into the afterlife.

Zeke Powerz will be hosting the special event “Encounters…An Evening With the Spirit of Houdini” on October 31 at the Read House Hotel in Chattanooga.

The historic hotel is believed to be haunted and is the ideal place to aim to reach a person who has long since been deceased. The hotel is in the heart of Chattanooga on 107 West Martin Luther King Boulevard and has been an intriguing site in the city for more than 130 years. The site may also be an ideal environment to reach Houdini in.

Zeke Powerz is an intriguing paranormal magician who aims to find people from the afterlife. He looks to encounter them and always focuses on producing the best possible environment for reaching such people. His attempt to find Houdini at the Read House Hotel will be one of the most intriguing efforts he has put in throughout his life.

The strong work being planned by Zeke Powerz will require plenty of concentration and effort. But the end result will entail contact with one of the most iconic illusionists in history. By reaching Harry Houdini, Zeke Powerz will be able to get the famed person to escape the chains of the afterlife.

Various Houdini artifacts will be on display at the event. The artifacts include many items that were owned and used by the late Houdini.

Due to the intense and emotional nature of the event, children under the age of 13 are not allowed to attend. The event is not recommended for those who are recently bereaved or those sensitive to paranormal artifacts.


Additional details on the event can be found online at paranormalmagician.com. Tickets can be purchased through Eventbrite.