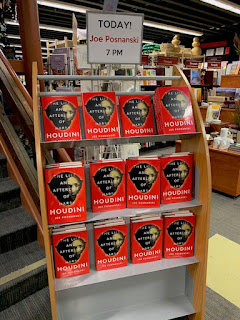 On Wednesday I had the pleasure interviewing The Life and Afterlife of Harry Houdini author Joe Posnanski at Vroman's Bookstore in Pasadena, CA. It was a terrific event with a great turn out.

I had teased "a very special magic guest." That guest was none other than the mighty Mike Caveney! Yes, the self-proclaimed "#1 Houdini hater" came out to talk Houdini and it made the event all the better. Joe joked that we were the angel and devil on his shoulders.

After the event, Mike invited us to see his famous Egyptian Hall Museum. This is the first time I had ever seen his collection and it's a mind blower! And it turns out the "#1 Houdini hater" has some pretty sensational Houdini items, including an original poster for Houdini's "3 Shows in One" in Harrisburg that I've never seen before. (Harrisburg was the final stop for his 1925-26 tour.) So it was a Houdini-filled night in good old Pasadena.

Thank you Joe. Thank you Mike. And thanks to everyone who came out to see us.

Click here to see the full list of Joe's upcoming appearances. The Life and Afterlife of Harry Houdini can be purchased at Amazon.com and Amazon.co.uk.