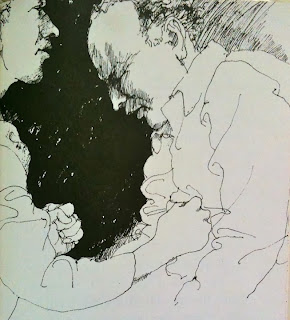 Last month I did a post about whether it was medically possible that the punches to Houdini's stomach delivered by J. Gordon Whitehead really did cause his fatal appendicitis (result: it's possible). That post kicked off a firestorm of discussion -- over 100 comments and counting -- about Whitehead and his motives in throwing those punches. The comments have proven to be more interesting and informative than the post itself!

Front and center in the action is Houdini author and expert, Patrick Culliton. To aid in some of his points, Patrick has now posted to his website Houdini's Ghost the sworn affidavit of J. Gordon Whitehead. It's a remarkable read that contradicts the established account of what happened, right down to saying that it took place on October 21, not October 22.

Whitehead goes on to say that Houdini not only encouraged the initial punch, but egged him on to punch him repeatedly, and that the other students in the room, Sam Smiley and Jack Price, didn't voice any objections. This wildly different from what Smiley and Price themselves reported in their own sworn statements. Whitehead also says he visited Houdini on two more occasions after the dressing room incident, and confirms that he was at Houdini's lecture at McGill.

Most biographers discount the Whitehead affidavit when reconstructing the dressing room incident and instead rely on the statements by Smiley and Price. Therefore, this isn't a version that is generally known. It's fascinating stuff, so click the link below and have read at Houdini's Ghost: