Halloween happenings at the Houdini Museum in Scranton 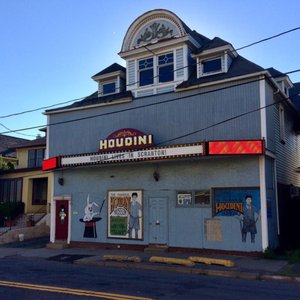 Dorothy Dietrich and Dick Brookz at the Houdini Museum in Scranton will be marking the 93rd anniversary of Houdini's death with two special events.

The first will their annual Original Houdini Seance on Halloween. They will actually hold TWO seances this year; one at 1:26pm, the exact time of Houdini's death, and the other at 7:30pm, the time of his last show. They will offer free snacks and show clips from The Grim Game starting at Noon and 6:00pm. Both seances are free "as wife Bess wanted them."

The following day, November 1, the museum will host author Joe Posnanski for a signing and reading of his new book The Life and Afterlife of Harry Houdini. Dorothy and Dick and the Houdini Museum feature in the book. The building facade is even pictured on the endpapers. This event takes place at 7:00pm.