You can still get Houdini The Key by Patrick Culliton 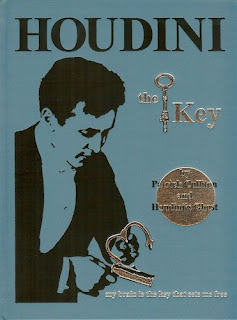 If you've read Joe Posnanski's The Life and Afterlife of Harry Houdini then you are now keenly aware of Houdini The Key by Patrick Culliton (and Houdini's Ghost). Joe spends a good chunk of his own book in search of this all-important work that reveals Houdini's most closely guarded secrets, including the Water Torture Cell.

But Joe made a few mistakes. First, the slipcase and cover of the book is not made of vinyl. It's made of a "bulletproof library cloth" called buckram. (That looks a lot like vinyl!) But more importantly, the book is not as hard to get as Joe believed. Patrick initially produced only 278 copies. But as those sold out, he quietly produced another 113, available only to those who missed the first run. Some of those are still available to buy direct from Patrick for the cover price of $195 (plus $12 postage), which is well below what the book sells for in auction. And Patrick will even sign it for you!

So if want Houdini The Key all you need to do is CLICK HERE.