As part of WILD ABOUT HARRY's 10th anniversary, I will post links back to significant stories from 2010 with a ten year follow up. Today I share the first of these flashbacks from January 26, 2010.

Houdini's famous Shelton Pool test is well known. But you'll barely find any mention of his second underwater endurance test performed at the Worcester YMCA a month later. So click the link below and travel back 10 years to read all about: 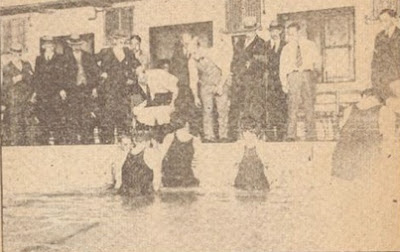 TEN YEAR UPDATE: This still remains a largely unknown Houdini stunt and the photo above is still the only known image. I wish I had more to share. But what I had 10 years ago is still pretty much all I know.

UPDATE: Reader Jay Hunter has provided four remarkable must see photos from this test, SO GO!