Here's an exciting followup on yesterday's anniversary flashback post about Houdini's little known underwater test at the Worcester YMCA on September 28, 1926. Reader Jay Hunter has generously provided four remarkable photos of this stunt from his collection. Until now, we've only had is a single poor quality newspaper image of this stunt. Now, thanks to Jay, we finally see it all! 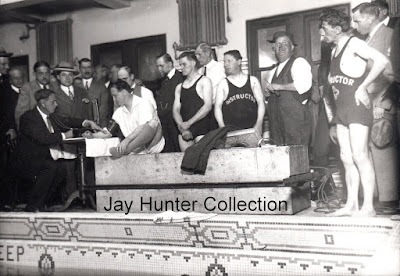 I'm especially excited by this first image that shows Houdini being examined by a doctor before the test. Not only is this a great photo from the stunt, but it instantly joins an elite group of pics that are the last ever taken of the magician. He looks fit, healthy, and fantastic in this shot. In fact, he looks better here than in many of the Shelton pool test pics. It's heartbreaking to think he's only a month away from death.

The other photos show the test in progress. Note Jim Collins poolside. 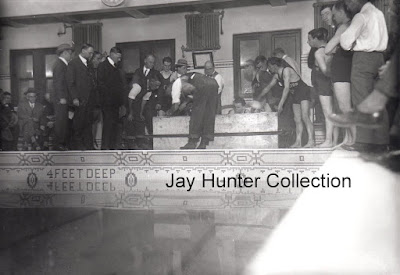 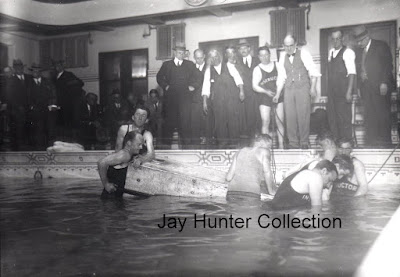 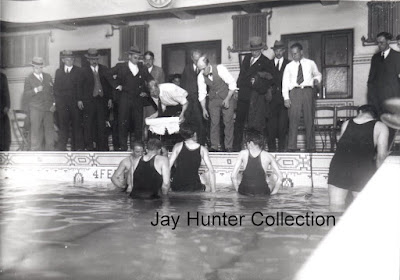 Here is an article from the Worcester Daily Telegram describing the YMCA test.

Sealed in a small casket, Houdini, wizard extraordinary, remained at the bottom of the Y.M.C.A. tank one hour, 11 minutes, Tuesday morning, proving to an audience composed largely of physicians in scientific men that the seemingly impossible feat could be done. While Yogis of India claim to be able to stay buried indefinitely and come up alive by means of spiritual power, the great American performer accomplished his stunt, he asserts, by simple natural means.

Houdini was placed in the iron casket, measuring about 6 feet and containing not more than 10 cubic feet of space. The lid was then soldered on and the casket submerged and held down by weights and sight men sitting on it. While thus imprisoned the master wizard communicated with the outside by means of the telephone and electric bell.

The secret of the stunt, Houdini claims, was in banishing fear and in taking shallow breaths. By remaining quiet he was able to control in a measure the consumption of air.


The original impetus for the Worcester test was so Houdini could answer critics who claimed his telephone system somehow provided him with air during the Shelton test. Papers reported that Houdini would do this test in new glass topped casket which would not require communication. However, we can see in these photos that the casket Houdini used is almost identical to the one he used at Shelton. A few hours after this test he received his new glass topped casket from the Boyertown Casket Co. of New York which he used for a third (non submerged) test at the Summerfield's Furniture store in Worcester on September 30.

With these three stunts we can see that Houdini was clearly moving in the direction of endurance tests being his primary "outdoor" publicity stunts. Very much the kind of thing that David Blaine performs today. It's another reason I find photos like these so exciting. We're catching a glimpse of Houdini's final career metamorphosis.

A monumental thanks to Jay Hunter for sharing these gems from his collection.