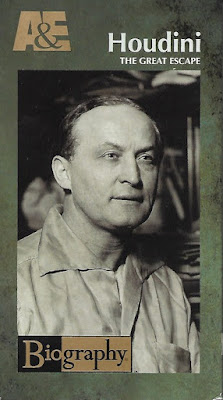 For some reason I'm feeling nostalgic for the documentary Houdini: The Great Escape, which first appeared as part of the popular A&E Biography series in 1994. But this doc, which was once so ubiquitous, is now among the hardest to see (unless you held onto your VHS machine).

Launched in 1987, A&E's "Biography" series offered up hour long profiles of famous figures in history. The series was hosted by Peter Graves and later Jack Perkins. It took them a while to get to Harry, but they finally did so with Houdini: The Great Escape, first airing on June 20, 1994.

The documentary is well written by Alan Goldberg and is narrated by Jack Perkins. It includes interviews with Patrick Culliton, Harry Blackstone, Jr., James Randi, John Bohannon, Charles Reynolds, Penn & Teller, Mark Edward, Dorothy Young, and Marie Blood. It's especially nice to see Marie as she did not do many onscreen interviews. There's plenty of Houdini footage and photos to enjoy. It's also interesting to see Ken Silverman in the credits as this was well before the release of his book. The documentary was dedicated to Manny Weltman, "In memoriam for his extraordinary archive and love for Houdini." Manny had passed away a month before the first airing.

A&E released select episodes of Biography on home video in the 1990s, and Houdini was among the first. I always felt the photo they used on the box (above) was an odd choice--certainly they could have found something more iconic? But I was also happy for this odd choice as it was a pic I had never seen. And if there's anyone out there who collects VHS, know there was an earlier release with a plain purple box with just Houdini's name on the cover.

With many repeats on cable and the home video always in stock in big bookstore chains like Barnes & Noble and Borders, Houdini: The Great Escape was inescapable. I suspect for many it was their introduction to Houdini's (non-fictional) story. It was later revamped with new narration for the Biography Channel's "Bio 4 Kids" series.

But the doc did not make the jump to DVD, and as far as I know, it has yet to appear on any streaming platform. And while some of the Biography episodes can be found on YouTube, Houdini is not among them. So now seeing this classic documentary is a magic trick in itself.

Here's a bit of related trivia. In a May 1998 interview in Movieline magazine, actor Jim Carrey was asked, "If you could dine with any group of people who have been featured on A&E's Biography, who would you choose?"