Did Houdini do the Water Torture Cell in full view of the audience? 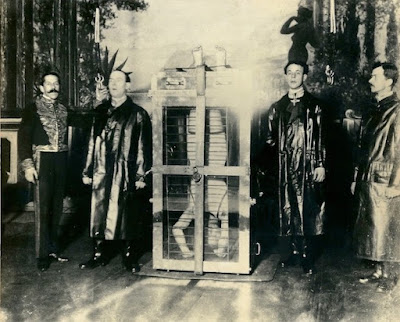 In recent years it has become fashionable for escape artists to do Houdini's iconic water escapes, such as the Milk Can and Water Torture Cell, in full view of the audience. This would appear to be a bold new innovation. But is it possible Houdini occasionally did his Water Torture Cell without being concealed in his curtain cabinet? There is some evidence that he did!

In January 1924, a seven-year-old Morris Grenzow saw Houdini at the Orpheum Theater in Madison, Wisconsin. Mr. Grenzow's memory remained vivid, and he related what he saw to the Houdini Historical Center in May 2000. The following exchange appeared as part of that interview which ran in the Third Quarter 2000 issue of the Mystifier:

Grenzow: The final act was the water chamber. At that time Mrs. Houdini came out on the stage and there was another man there who had a fire axe that stood by the water chamber in case something were to go wrong and probably make it look good.... They lowered him in there upside down and he was in chains... I could see him wiggling around in that water to get out.

HHC. Was there a curtain in front of the water torture cell?

Grenzow: No. No. No. You could see the whole thing.... you [could] see him wiggling around in there. He came back out through the top.


Is it possible he really saw Houdini do the escape in full view? Let's dig deeper.

Grenzow saw Houdini at the end of a nationwide vaudeville tour that had begun in January 1923. This was a "return" tour after Houdini had spent several years making movies. I looked back at newspaper accounts from this tour and noted a few interesting things. First, even though the Water Torture Cell (a.k.a. USD) was 11 years old, it was being touted as his "new sensation." I also found many mentions of Houdini being shackled inside the cell, which is not typically how we think of him doing the escape, yet it is also what Mr. Grenzow remembers.

But the most exciting thing I found were three separate mentions of Houdini doing the escape "in full view of the audience." These appear while Houdini was playing Winnipeg (Feb. 19-25), Vancouver (Feb. 28-March 4), and the Hillstreet Theater in Los Angeles (April 23-29). Below is the mention from the Los Angeles Times:


I should note the above is clearly from a press release, not an eyewitness account, so it's not something I would normally give much weight to. But in light of Mr. Grenzow's account, this does become more meaningful. I also found a good description of the escape while Houdini was playing San Fransisco in March 1923 that says "a curtain is pulled" over the cell. So if Houdini was indeed doing a full view version of the USD on this tour, it appears he only did so in select theaters.

But how could Houdini do this without exposing the secret? I don't want to expose any secrets myself, but according to Mr. Grenzow, Houdini "came back out through the top." So let's accept that's what he and the audience saw.

My guess is the cell would still have been screened on the back and side, but the front open to the audience (not unlike how a seance medium is screened). Far from revealing anything, Houdini's escape might have appeared perplexing. Exactly HOW he was emerging from the top would not necessarily be clear. He might even appear to be penetrating the top of the solid stocks (and likely playing it up as such). Assistants could then remove the screening and the cell could be examined and all would still be locked tight. So in this presentation, Houdini would be mixing illusion and escape.

This would also explain why he only did it in select theaters. In the same interview, Mr. Grenzow says the Madison Orpheum "wasn't a big theater." So it's possible Houdini only did the full view USD in theaters where audience sight-lines would be agreeable to the effect.

Not long ago we uncovered evidence that Houdini did a caged version of the USD during his 1916 tour. That opened the door to the idea that Houdini would occasionally reinvent how he presented his most famous escape. So was a full view version a reinvention for the 1923 tour, if only as an occasional experiment? I think it may have been, and that's pretty wild!

Feel free to share your own thoughts in the comments below.