New radio adaptation of 'Imprisoned with the Pharaohs'

Dark Adventure Radio Theatre is offering an all-new radio adaptation of Houdini's Imprisoned with the Pharaohs. The "true" story was ghostwritten for Houdini by H.P. Lovecraft and features the Escape King trapped in the heart of an Egyptian pyramid. 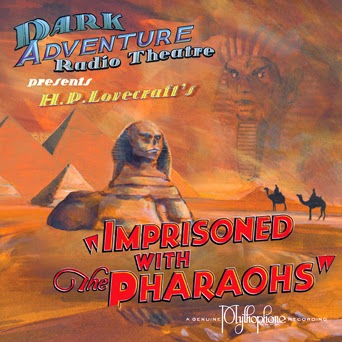 As war brews in Europe, world-famous magician Harry Houdini and his wife Bess stop in Cairo on a world tour in the summer of 1914. There they meet with Miskatonic professor of archaeology Nate Ward, who tells them the story of Nitocris, the dreaded ghoul queen of the 4th Dynasty. After a visit to the Sphinx and a dig site led by German archaeologist Ludwig Borchardt, the Houdinis follow their mysterious Arab tour guide, Abdul Reis al Drogman, to the top of the Great Pyramid. Secret identities are revealed and after a desperate struggle Houdini must attempt the escape of a lifetime from under the pyramids!

The CD comes in a jewel case and is packed with nice extras, including a letter on authentic Cairo Museum letterhead in which Nate Ward describes the sarcophagus and mummy of Nitocris; a Cairo postcard from Houdini to tycoon Charlie Tower; the playbill from Houdini's show at the American Cosmograph Theater in English, French, Greek and Arabic, and more.

You can buy Imprisoned with the Pharaohs on CD or as an MP3 via the Dark Adventure Radio Theatre website.