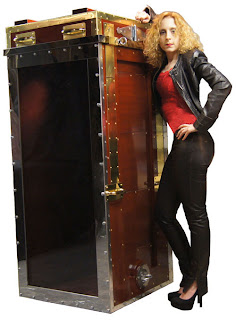 Richard Sherry and Dayle Krall of The Magic of Sherry and Krall have created an authentic working replica of Houdini's Chinese Water Torture Cell, which Dayle Krall (pictured) plans to perform in celebration of the 100 year anniversary of the creation of this, Houdini's most famous escape.

Building this cell was a painstaking two year process. Richard Sherry generously shares with us the secrets of how he was able to create such an authentic reproduction.

"I was able to examine the original Cell. When I was a kid I lived in Toronto which was 70 minutes away from Niagara Falls. Between 1973 and 1980 I had visited the museum multiple times and taken dozens and dozens of pictures of the Cell. So I had a very good reference from my experience. However when I was starting to build the Torture Cell with my pictures being over 30 years old, they weren’t very clear anymore. So I also relied on pictures of John Gaughan’s rebuilt Torture Cell from the internet as further reference.

For materials, my research indicated that it was built from Honduran mahogany. This wood was very difficult to source and when I did find it, it was only 3/4” thick. Houdini’s Cell had wood that was 1” thick so it cost thousands of dollars to obtain the proper amount of wood that I needed for the project.

All the screws used on Houdini’s Cell were slotted which were incredibly difficult to find in Canada. There are hundreds of screws used in this recreation as Houdini had in his.

All metal was formed and shaped in my shop. I created the drain plugs, which were no where to be found, on my metal lathe.

It was an excruciating 2 years to create this virtually exact replica of Houdini’s Chinese Water Torture Cell but absolutely fulfilling.

We are currently in negotiations to perform this at a magic convention. We want to commemorate the 100th year anniversary of the creation of the Chinese Water Torture Cell with a tribute to Harry Houdini in our performance."