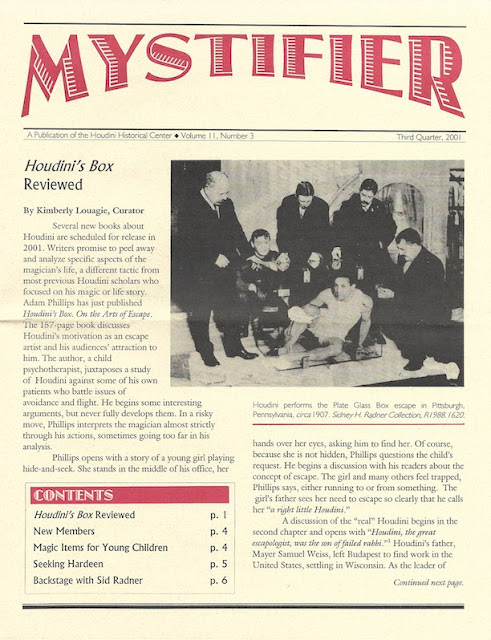 The third quarter 2001 Mystifier kicks off with a review by HHC curator Kimberly Louagie of the new book Houdini's Box: The Art of Escape by Adam Phillips. While somewhat critical of the author's undeveloped ideas, in the end she still recommends the book as "a first step in delving into a very difficult discussion about Houdini's psyche." A highlight of the review is a terrific photo of Houdini in his plate glass box in Pittsburgh in 1907.

A list of new members and a gift shop update follows. We then get a terrific piece by George Hardeen introducing himself and talking about how he has only recently come to know the Houdini world. George writes:

I'm surrounded by new friendly people willing to guide me, and faces from the past who seem oddly familiar. They should. The faces are my family, and the new people are those who knew them, love them and love them still.

Sid starts his "Backstage" column with a rundown of several new books: Final Seance: The Strange Friendship between Houdini and Cohen Doyle by Massimo Polidoro; Spellbinder: The Life of Harry Houdini by Tom Lalicki; Houdini, Tarzan, and the Perfect Man: The White Male Body in the Challenge of Modernity in America by John F. Kason; and the aforementioned Houdini's Box: The Art of Escape by Adam Phillips. Sid also notes that the bestseller The Adventures of Kavalier and Clay by Michael Chabon "features repeated references to Houdini."

Sid continues with a shoutout to a Houdini article in the November 2001 Games magazine. He officially announces that the Houdini Stamp will be issued on July 3, 2002. He speaks about meeting George Hardeen, and that plans are underway to hold The Official Houdini Seance in Detroit that year.

Sid closes by announcing that a Houdini straitjacket was stolen from the Houdini Museum at the Venetian Hotel in Las Vegas. He asks for any information that could help in the recovery of the jacket and arrest of the guilty party. (I'm not sure if it was ever recovered.)