Here's something exciting. Arthur Moses has released a new book that examines the 1908 story "Auf den Spuren Houdinis" (On The Trail Of Houdini). This marked the first fictional pairing of Houdini and Sherlock Holmes. The book includes the original German text as well as a never before published English translation. Below are details. 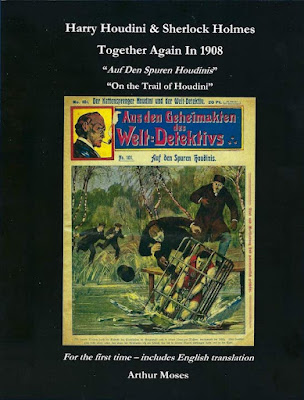 After a performance in Berlin, Germany, Houdini is kidnapped by his lesser rivals. Sherlock Holmes is urgently summoned to Berlin to investigate. Through his masterful deductive reasoning he tracks down the dangerous perpetrators in the nick of time.

A recreation in its entirety of the German language pulp magazine series Aus den Geheimakten des Welt-Detektivs, featuring the 1908 issue number 101 "Auf den Spuren Houdini's" (On The Trail Of Houdini). Uniting Harry Houdini and Sherlock Holmes, formidable protagonists together, one being a fictional character and the other a living legend of history, is a masterful stroke synchronizing their uniquely charismatic identities. This text focuses on a single 1908 German language publication which brought them together, along with its never before published English translation in addition to later translated foreign language editions based upon the German work. Their two personas are as popular today as ever, with many modern pastiches, comic books and films successfully pairing Houdini and Holmes.

Other reprints of this title in other foreign languages are represented by reproducing their covers; France, Belgium, Denmark, Mexico, Netherlands, Portugal, Romania, and Spain. Sherlock Holmes was the creation of Sir Arthur Conan Doyle.


But it gets even better! Arthur has also released two other separate volumes containing the rare Portuguese versions of this story from 1911 and circa 1920. 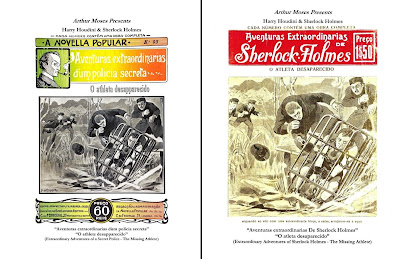 Says Arthur, "All 3 will have a great interest for both Houdini and Sherlock Holmes collectors." He has launched a website devoted to the books. All can be purchased from Amazon:

The books can also be found on Amazon.de, Amazon.fr, Amazon.es, Amazon.it, Amazon.jp, and Amazon.ca.