At last! Evidence of Houdini's near fatal buried alive surfaces

The story of Houdini nearly dying during a buried alive stunt in California is one that appears in most biographies. As told by Houdini in a 1925 Collier's article ("When Magic Didn't Work") he was trying the escape at different depths. But when it came to six feet, he found the weight of the earth too much and for the first and only time in his career he panicked and shouted for help. But he could not be heard under the soil. By sheer will he was able to claw his way to the surface and collapsed as his assistants hauled him from what had almost been his real grave. Houdini called it "the narrowest squeak in my life."


It's a great story, but there has always been a problem with it. There's no evidence that it actually happened. Exactly where the stunt took place has never been clear. Houdini first said it happened "in Hollywood." But it later became "Santa Ana", which is a good 30 miles from Los Angeles. Nor has a date ever been established. Most biographies, while never explicitly dating it, place it in their chapters covering the years 1915-16. But in Collier’s Houdini wrote that it occurred "six years ago," which would make it 1919. But Houdini was famously bad with dates.

The only thing that has kept me from dismissing this story as Houdini-generated mythology is a handwritten annotation Houdini made on some Buried Alive notes which appears (undated) in Walter B. Gibson's Houdini's Escapes (1930):

"I tried out 'Buried Alive' in Hollywood, and nearly [?] did it. Very dangerous; the weight of the earth is killing."


So this is where things have stood on the Buried Alive story for decades.

But last Wednesday while doing some unrelated research, I stumbled on the following from the May 16, 1919 Los Angeles Times and nearly fell out of my chair!

So is this THE buried alive? Let's dig deeper.

Houdini had arrived in Los Angeles in late April 1919 to begin work on The Grim Game. By mid May he had already performed with the Lasky players at two Liberty Loan drives in Pershing Square (in which he was tied to a cannon). So this is right in line with his activities at this time. And it looks like Houdini had the year right after all!

The Air Memorial Day circus was a major event featuring over 50 airplanes and staged dogfights. The grand finale was to be the bombing of a German balloon, but it broke loose and drifted off over Hollywood. The crowd was estimated at 100,000.

The location, De Mille Field, sat at Crescent and Melrose Avenue between the cities of Hollywood and Santa Monica, which is likely what Houdini meant when he wrote Santa Ana. If DeMille Field sounds familiar, that's because it's where The Grim Game airplanes were leased and took off on their own fateful flights.


But there are some problems. In Houdini's telling it was a private test done on a bet with the magician trying the escape at graduating levels. I was also able to find several accounts of the Air Memorial Day event itself, including a detailed schedule, and there is no mention of Houdini, let alone a near death experience. Not something you'd expect a newspaper to ignore! So it appears Houdini did not do the escape at the event itself. Nevertheless, I still think we've found it.

My thinking is Houdini's close call occurred while he was practicing the escape, likely a day or two before the event. This fits with the graduating levels. He then cancelled the performance when he discovered six feet, as announced, was not feasible and damn dangerous. For it to be announced on the 16th, and then the papers show Houdini removed from the lineup on the 18th, suggests this test happened on the 16th or 17th. It seems logical Houdini would have tried it at DeMille Field itself, although we can't know that for certain. But a test before the event makes sense, and the fact that he didn't do the escape as announced only reinforces the idea that something happened.

So there we have it! Houdini's near fatal buried alive stunt is not the stuff of mythology but appears to have happened in mid May 1919. Maybe even 101 years ago today? 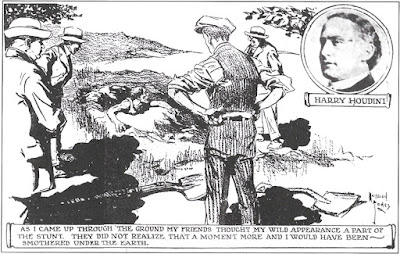 The illustration at the top of this post is by Noa Kelner and used with permission. Bottom illustration is from Patrick Culliton's Houdini The Key.