In 1977 The New School in New York City offered a 10-week course called "The Incredible Houdini: The Man...The Myth...The Magic". It was taught by Gabriel Grayson and included a mouthwatering lineup of guest speakers. Last weekend Joe Notaro shared a flyer from the course showing that lineup of a-listers (click to view).

While doing a little more research I discovered something pretty wild. The New School Archives has a 2+ hour recording of a Houdini Seance held in their auditorium at 66 West 12th Street on Halloween 1977. While not part of the official curriculum, it was related to the course and open to the public. At the table was Milbourne Christopher, Bernard C. Meyer, Billie Dunninger, Morris N. Young, Louis Rachow, Henry Muller, and Sidney Radner. (Walter Gibson was ill and unable to attend.) The moderator was Gabriel Grayson.

It's not your typical Houdini seance in that the medium, Ethel Meyers (who played a role in the Amityville Horror hoax), quickly makes contact and "Houdini" speaks to the gathering in the first person. This means the experts at the table can ask questions of Houdini directly.

Did she/he pass scrutiny? If you want to hear for yourself, you can access both parts via the link below.


HOUDINI SEANCE AT THE NEW SCHOOL 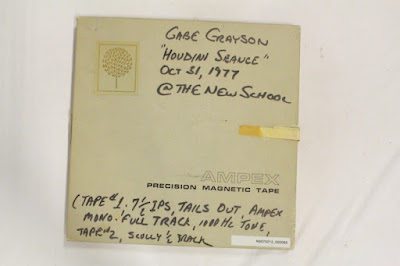 If you don't want to go to the trouble of listening, I can tell you that Meyers, after getting off to a good spooky start, bombs spectacularly when the questions begin. She...I mean, Houdini...cannot or will not answer even the most basic question. The knockout blow occurs when Sidney Radner asks, "What do the letters USD mean to you?" Her answer: "United States Detention Home."

One thing that has me intrigued is when Christopher asks details of a seance Houdini attended in January 1926. It's clear Christopher has Houdini's notes on this seance, but it's one I've never heard of. If anyone is aware of these notes or has the details, please give me a shout.

I'm also wondering if The New School recorded the course and guest speakers. To hear the remembrances of Houdini by Walter B. Gibson would be phenomenal. Also, Louis Rachow played the Houdini voice recording during his class on November 15. This marked the first time the recording was played publicly. How much of it did he play?

If anyone attended this course, please share your memories in the Comments below.