Days of Thrills and Harry Houdini

While the big boys were slugging it out in last week's Potter & Potter auction, spending thousands on some important Houdini lots (and some that didn't seem that important), I was happy to snap this up on eBay for a $15 Buy It Now. No, it's not rare, and you might not even understand exactly what this is. But I've always wanted one of these "Houdini dangles from a cliff!" lobby cards from Days of Thrills and Laughter because I've long considered this movie an important part of Houdini's amazing afterlife. But I'll get to that. 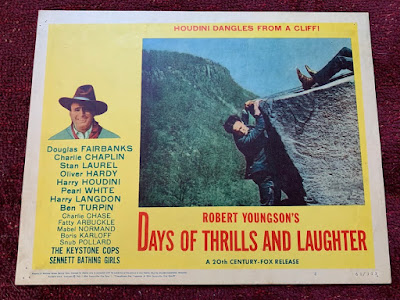 Released by 20th Century Fox on May 5, 1961, Days of Thrills and Laughter was a feature length documentary made up of extended clips from silent movies. It was the third such film from producer Robert Youngson after The Golden Age of Comedy and When Comedy Was King. The original New York Times review of the movie at the Sixty-eighth Street Playhouse states:

Since he is concerned not only with comedy but also with thrills, Mr. Youngson has included bits by Douglas Fairbanks ("Wild and Woolly") and some mad material from the likes of such serial experts as Pearl White ("The Perils of Pauline," etc), Ruth Roland, Warner Oland, Boris Karloff and, believe it or not, Harry Houdini, rescuing a somewhat foggy damsel from taking the distressing drop over Niagara Falls.


The Houdini segment runs about 5 minutes and shows more than just the Niagara Falls rescue from The Man From Beyond. We also see the entire cliff fight (as shown on the lobby card, although obviously not in color) and the coat rack escape from The Master Mystery. But what will be of most interest to Houdini buffs is rare behind the scenes footage of Houdini and Bess visiting producer Al Christie at Universal Studios in 1915. It's a remarkable piece of film that I don't believe has appeared anywhere else. All the Houdini footage is excellent quality and is credited as coming from the Larry Weeks collection. 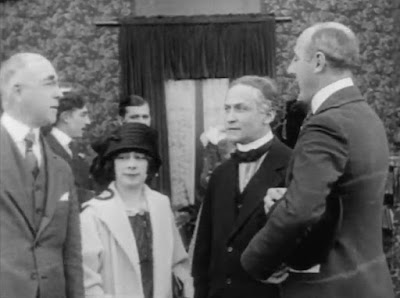 I consider Days of Thrills and Laughter important because it was the first such documentary to establish Houdini and his film work as "essential nostalgia" from this era. Along with television clip shows like Fractured Flickers, these went a long way in flagging to a new generation what was worth remembering. They also anticipated the cable biographies of the 1990s and beyond. So it's interesting that Houdini film career, generally considered a failure, affords him a place beside cinema giants like Fairbanks and Chaplin in this early work. Houdini always said he was making his movies for "future generations." So maybe not such a failure after all?

Days of Thrills and Laughter was released on DVD in 2010 and can still purchased at Amazon.com. But it can also be streamed for free via Amazon's Prime Video.