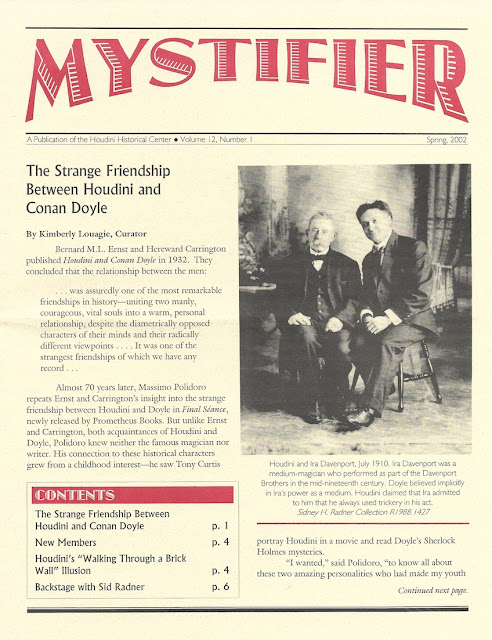 The Spring 2002 issue of Mystifier begins with a lengthy review by HHC curator Kimberly Louagie of the new book, Final Séance: The Strange Friendship Between Houdini and Conan Doyle by Massimo Polidoro. Louagie compares and contrasts the book to the Bernard Ernst and Heward Carrington's 1932 Houdini and Doyle: The Story of a Strange Friendship, of which it draws much inspiration. While somehwhat critical of Polidoro's work, in the end she recommends the book.

The newsletter continues with a good article about Houdini's Walking Through a Brick Wall by guest contributor Stephen Forrester. Jim Klodzen is a familiar name among the new HHC Members.

Sid Radner begins his "Backstage" column discussing how Houdini's fight against frauds continues with federal and Florida state officials recently cracking down on the Psychic Readers Network. Says Sid, "Strange, isn't it, that these people who claim to predict the future can't seem to avoid the authorities?"

Sid reports that Houdini appeared as a character in Dave Graue's and Jack Bender's comic strip "Alley Oop" from December 3, 2001 through January 9, 2002. He recommends Mickey Hade's New Encyclopedia of Escapes, but points out that the method Hade's gives for Houdini's Water Torture Cell is incorrect. And Sid would know!

Sid finishes with a reminder that the Travel Channel's Houdini documentary will air on April 15, 2002.