Today we have the answer to the question of what happened to the electric chair Houdini purchased from Huber's Dime Museum in 1910 and kept in his New York home (read: Houdini and his electric chair). I can also now show you exactly what the chair looked like.

Reader Richard Lane, who's specializes in researching hypnotic performers, shared with me information he uncovered at the Harry Ransom Center at the University of Texas at Austin. The university houses a massive Houdini collection, including correspondence with Dr. Walford Bodie, a Scottish hypnotist and stage magician famous for his mock electrocutions. (Bodie was not a real doctor, the M.D. stood for "Merry Devil," he explained.)

Bodie, who counted Charlie Chaplin among his admirers, wrote to Houdini on April 8, 1920, asking if he did indeed own the first electric chair from "Sing Sing", and that he would love to see it. By the end of the month, Houdini gave Bodie the chair. Bodie displayed the chair in theater lobbies in the UK with a sign that boasted not only its grisly history, but that it was a gift from the "Great Houdini."

Below is a photo Bodie sent to Houdini as thanks. This photo finally reveals Houdini's electric chair. 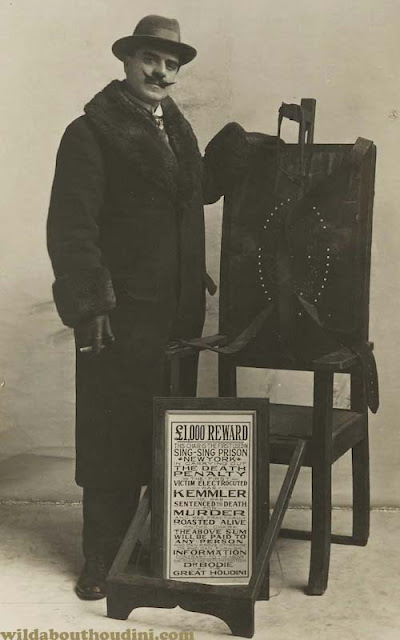 Harry Ransom Center The University of Texas at Austin.

While this answers the question of what happened to Houdini's chair, it creates new questions. The world's first electric chair, the one used to execute Kemmler, was housed at Aubun State Prison, not Sing Sing. And the Bodie photo reveals that the chair was clearly not the same chair from Auburn, nor is it the chair seen in Houdini's The Master Mystery. 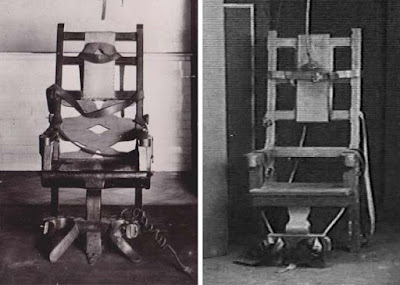 The chairs from Auburn Prison (left) and The Master Mystery (right).

It's possible Huber's advertised the chair as coming from Sing Sing because that was the more infamous and recognizable name to the general public. In a Dime Museum, exaggeration and hype was the name of the game. It's also possible this was just Bodie's mistake and Houdini never corrected him. "He'd had Sing-Sing rattling around his brain for 23 years," says Richard.

But I also think we need to consider the possibility that the Huber's chair may have been a fake from the start. Maybe the museum mocked it up and Houdini was fooled. Or maybe the young Houdini, who was performing at Hurber's the week the chair arrived, had a hand in creating the chair himself. He could have even suggested the idea. This is why he felt "sentimental" about it and bought it in the 1910 liquidation auction. This also explains why he let it go so easily in 1920. It wasn't a true historical artifact, just a bit of fun, and Houdini might have been happy to see it once again play the role for which it was created in the first place.

You'll notice that Bodie offered a £1000 Reward to anyone who could prove this was not the first electric chair or "furnish information contrary." He was lucky no one collected on that bet.

Today the whereabouts of the Huber-Houdini-Bodie chair is unknown, so that's still a mystery to uncover. But it wouldn't surprise me at all if it's still sitting on display somewhere, teasing people with its grisly (and questionable) history.

Thanks to Richard Lane for sharing his info on Bodie, and to Chelsea Weathers of The Harry Ransom Center for her help securing the Bodie photo. Also thanks to Dorothy Dietrich and Dick Brookz at the Houdini Museum in Scranton who first alerted me to the Bodie connection.

UPADTE: Our friends Dorothy Dietrich and Dick Brookz at the Houdini Muesum in Scranton have uncovered more information about Houdini's chair in the book, Old Sparky: The Electric Chair and the History of the Death Penalty by Anthony Galvin, which includes this revealing paragraph: