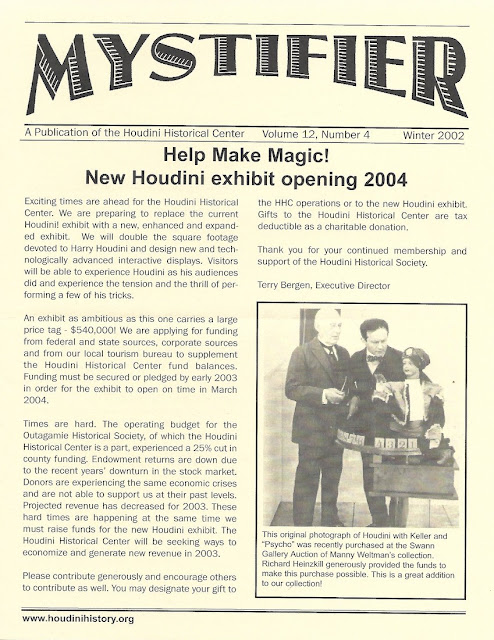 The now single color Mystifier for Winter 2002 begins with what would appear to be great news; a major expansion of the Houdini exhibit and new displays coming in 2004. In reality this was the beginning of the end for the "Houdini Historical Center" and the Mystifier under the new leadership of Executive Director Terry Bergen. (I've found it's never a good sign when a museum announces its displays will become "interactive.")

In addition to Bergen's opening article, which is largely a plea for donations for her vision, the cover of the newsletter features a nice photo of Houdini and Harry Kellar with the "Psycho" automaton. The caption says the HHC acquired the original photo at the recent Manny Weltman Swann Auction with funds provided by Richard Heinzkill.

Inside the newsletter is an obituary of Dr. Morris N. Young, who passed away on November 20, 2002 on his way to a magic convention in which he was the honoree. As a child Young saw Houdini perform and even shook his hand! He later co-authored the book Houdini Fabulous Magic with Walter B. Gibson. Young was also on the HHC board and regular contributor to the Mystifier.

The newsletter also contains an insert questionnaire asking members what aspects of Houdini's life should be highlighted in the new exhibits. The insert is meant to be mailed back to the HHC (which technically makes this a 4-page newsletter). Ominously, one question asks: "Would you like information on how Houdini performed his tricks?" This is followed by a full page ad for the HHC's new Houdini envelopes.

Sid Radner devotes his entire "Backstage" column to the 2002 Official Houdini Seance held in the Brooklyn Room of the New York, New York Hotel and Casino in Las Vegas. The seance was conducted by the "famous" Reverend Ray Fraser and his daughter Wendy Fraser-Baily from Detroit. The famous Houdini stayed away.

Sid then asks readers for suggestions about where future seances should be held, saying they are seeking "some special location at which he previously entertained." He then lists his Holyoke and Palm Beach addresses. He also announces (again) that he will soon acquire a computer to make communication easier.