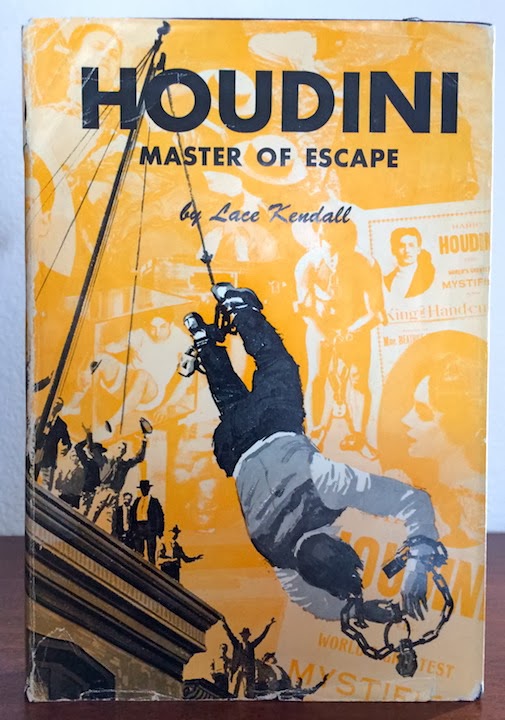 Last weekend I took a look at The Great Houdini, Magician Extraordinary by Beryl Williams and Samuel Epstein, which I called the "gateway biography" because it hooked so many school age kids on Houdini. I was pleased that so many of you connected with this idea and shared that it was, indeed, the first Houdini book you ever read.

I also read The Great Houdini in grade school. But for me there was another biography, not as well known, that worked not only as a gateway into Houdini, but reading itself. That book was Houdini: Master of Escape by Lace Kendall, first published by Macrae Smith Co. in 1960.

Like The Great Houdini, this was a biography written for young readers. But unlike the Epstein book, it shamelessly embraced all the mythology of the time (acid on dress, trapped under the ice -- it's all here!). But despite the many inaccuracies, the writing makes this a very captivating and enjoyable book for a young reader. It reads like fiction. That's probably because Lace Kendall was actually the pen name of Adrien Stoutenburg, an American poet and a prolific writer of juvenile literature.

I can vividly recall reading this book in a 7th grade classroom -- it was the chapter where "Erich" [sic] runs aways from his home in Appleton [sic!] -- and feeling as if I was right there with him:

The road stretching before him was pale blue in the pre-dawn starlight. At the last bend of the road Erich paused and looked back. He could see his house from here. It seemed asleep, dim and still behind the oak trees. He imagined he could see the gleam of the old wire strung between two trees although he knew it was too rusty now to glitter. His throat ached. Everything was so still he could hear his heart beating like a machine. He took a last look at the house and the town, coughed against the lump in his throat, hitched his pack higher on his shoulders, and went on. Briefly he wished that he had written a note to his mother to tell her not to worry. Well, Dash would explain. Then when he was rich and famous he would come home and fill his mother's lap with gold.

He walked faster, breathing deeply. Grazing cows mooed at him from the fields has passed. The sound of a cart rattled in the distance and he ducked into the shelter of pasture trees. If some farmer he knew saw him and urged him to turn back he was afraid he might give in. For already homesickness tugged at him.

He went on, the miles falling away. He found a creek and shade-heavy trees and sat beneath them, eating the bread and cheese he had brought with him. In the distance a train's whistle sounded.


I looked up from this passage and had the weird out-of-body experience of coming back to reality, back to the classroom. I had completely forgot where I was. Not only was this a great Houdini experience, but it was really the first experience I ever had of losing myself in a book. It was one of the things that made me a reader.

Houdini: Master of Escape did not a have a long or varied publication history. As far as I know, it was only ever published in a hardcover edition with the same dust jacket artwork. The only real variations between editions are found under the dust jacket. On the first edition there's an embossed "HOUDINI" in yellow on the front boards. Later editions featured the frontispiece illustration of Houdini by Guy Fry in various colors. In my collection I have the Fry image in gold (6th edition) and in green (11th edition).


One fun discovery I did make recently is that the image of Houdini dangling in chains on the dust jacket is actually from a publicity photo taken by LIFE magazine during the making of Paramount's 1953 biopic, Houdini. 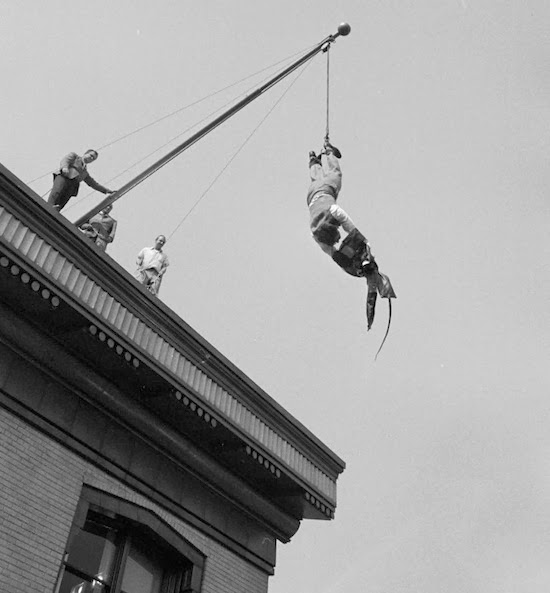 In a way this is fitting. Because like the great Tony Curtis movie, Houdini: Master of Escape does not let the facts get in the way of a good story. But it's such a great story and so beautifully told, all is forgiven.