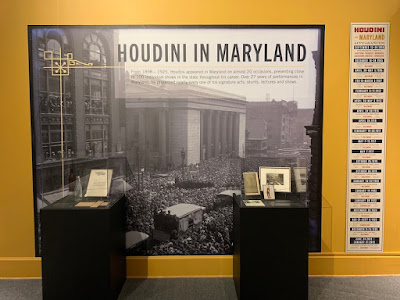 Last Sunday I had the great pleasure of speaking at the Jewish Museum of Maryland as part of their Inescapable: The Life and Legacy of Harry Houdini exhibition programing. It was a terrific event and their exhibition is magnificent! But what I want to share here is what I saw before the talk along with fellow Houdini nuts Fred Pittella and Joe Notaro (HHCE) who had come from New York and California respectively.

For whatever reason, I was thinking there wasn't much left of Houdini's Baltimore to see, that the locations of the theaters he played and the site of his 1916 suspended straitjacket escape were now unrecognizable. But after arriving in Maryland--and seeing Ken Trombly's formidable collection in Bethesda (thank you, Ken)--I did some quick research and discovered how wrong I was! So the next morning before my talk, Fred, Joe and I went in search of Houdini's Baltimore.

Our first stop was the location of Houdini's suspended straitjacket escape on April 26, 1916. Houdini did the escape from the Sun building, which sat on the corner of Charles Street and Baltimore. The escape drew a reported crowd of 50,000 and terrified Bess. According to the paper:

On Charles Street, from Lombard to Fayette, men and women, but mostly men, were packed in a dense mass, so dense that it was almost impossible to move. The roofs of the nearby buildings were almost as crowded and the throng stretched in diminishing numbers as far as the Masonic Temple and nearly to Pratt street.


Thank goodness for this street-naming description, as it made finding this location a snap (it was only 5 mins from our hotel). There are two famous photos that show the immense crowd that witnessed the escape, and many of the buildings in this photos remain today!

This first photo is looking down Charles Street (which is on an incline) and shows the intersection of Baltimore and Charles. (The Sun building is off camera to the right.) As you can see, the large white building with colonnades remains. So does the smaller building with a peaked roof behind it. A four story office building beyond is also still there. It's all wonderfully still recognizable. 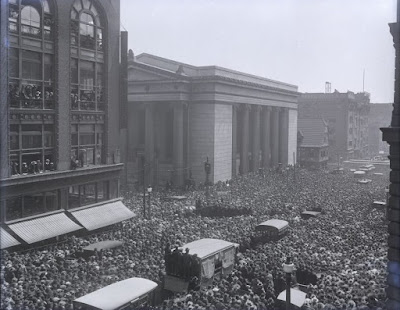 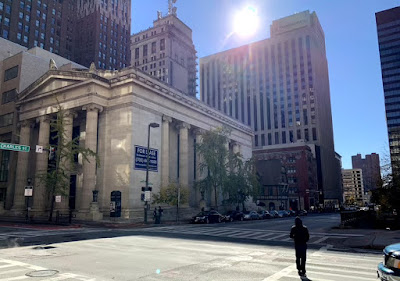 This second pic (from the Fred Pittella collection) is looking back UP Charles Street and was likely taken from a window in the Sun building itself. But one can see the familiar colonnades of the building across the street. The actual spot where Houdini was strapped into his straitjacket is now an underground pedestrian walkway. 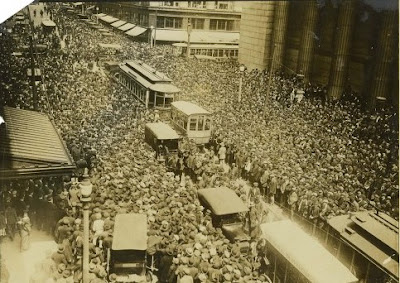 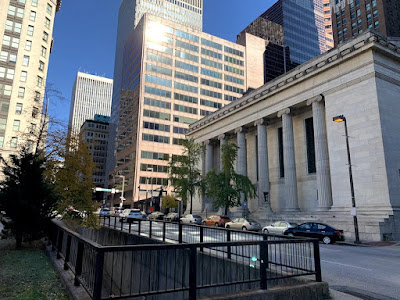 As for the Sun building itself, that is now long gone. The paper moved their offices in 1950. In fact, whatever replaced the Sun building is also now gone as the site has been recently cleared for new construction. 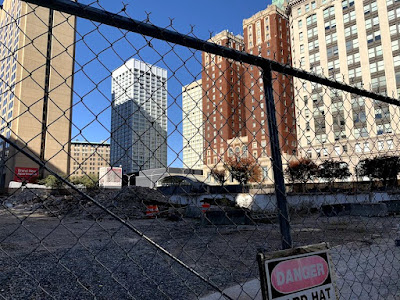 One last thing about this escape. In the JMM exhibition there is a wall-size enlargement of the famous crowd shot (seen at the top of this post). This allows one to see new details, including this! 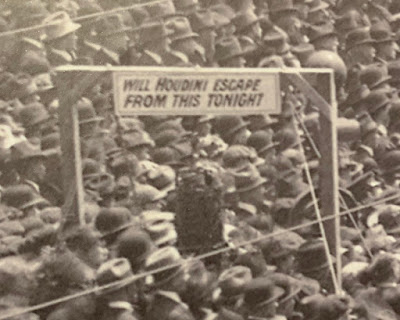 This appears to be Houdini's Iron Maiden and gallows sitting in the intersection of Baltimore and Charles. You'll notice the sign references "tonight." Houdini did indeed do a challenge escape from the Iron Maiden at the Maryland Theater on this very night. Pretty wild.

And speaking of the Maryland, that was to be our next stop. 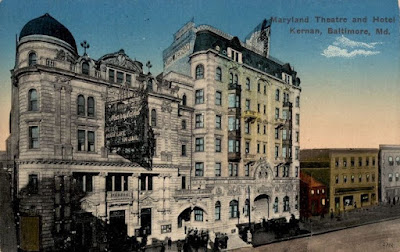 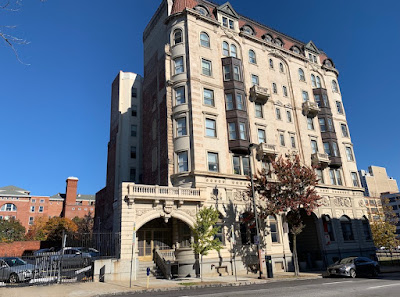 But the Maryland is not completely gone. In the photo below, notice how the ghost outline of the theater is still clearly visible on the side of the building where the red brick becomes white near the top. Unmistakable. 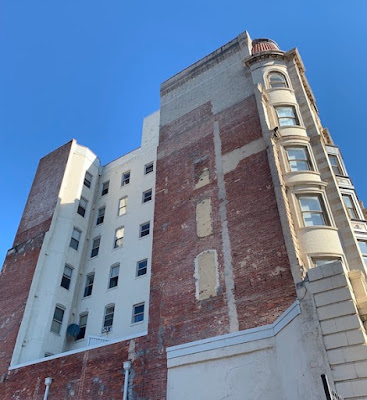 The actual site of the Maryland is now a parking lot (below). One wonders where the stage might have been? It's fun to think that on one of these parking spaces Houdini escaped from packing cases, countless handcuffs, the Iron Maiden, and his Water Torture Cell. 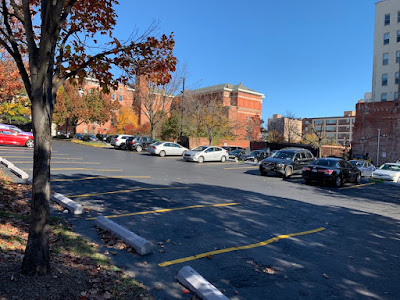 Later at the museum, David London, who curated Inescapable, gave us further details about the Maryland site. Turns out there was more here than we realized! As David said, "Houdini was all over this block." 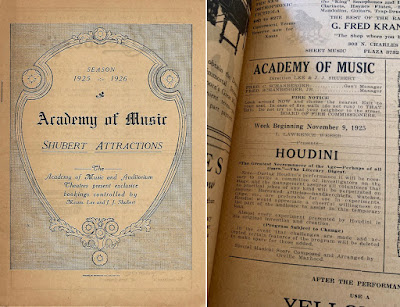 However, Houdini also played the Auditorium Theater during the week of April 30, 1906 with his short-lived roadshow company (watch for a future post on this). Amazingly, the facade of the Auditorium Theatre still stands just around the corner. What a surprise it was to find this! 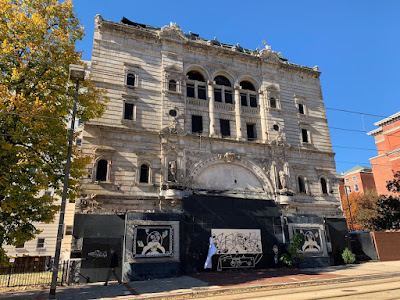 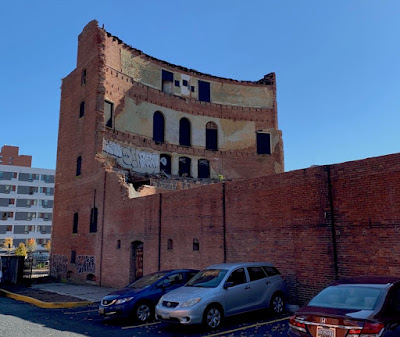 This building also has a magnificent ghost image, spotted by the eagle eyes of Joe Notaro. One can still make out the distinctive "Auditorium" name near the top of the building. 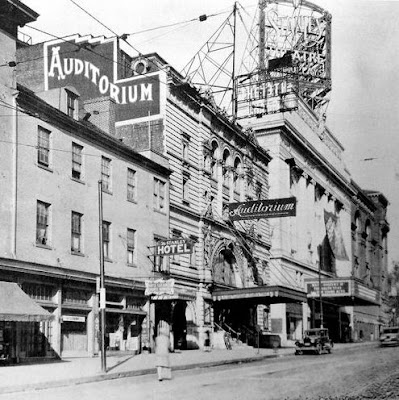 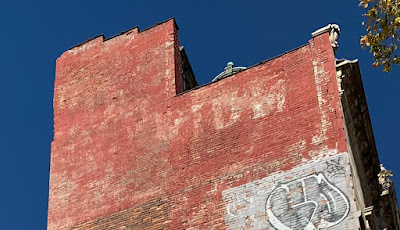 One Baltimore location we did not seek out was the site of Houdini's 1922 suspended straitjacket escape from the Munsey Bldg. Because it was show time!

Thanks to Fred Pittella, Joe Notaro, David London, Ken Trombly, Trillion Atwood, and everyone at the Jewish Museum of Maryland for making this such a memorable trip and helping me discover Houdini's Baltimore.

Inescapable: The Life and Legacy of Harry Houdini runs through January 19, 2019. I highly recommend it! 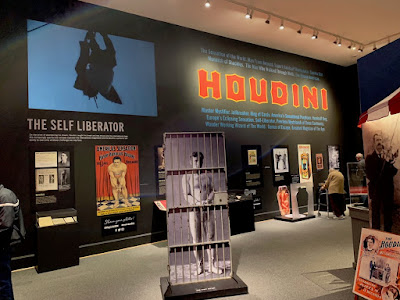