Houdini gets the grindhouse treatment in Hollywood 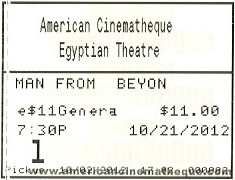 Two of Houdini's silent movies screened Sunday night at the historic Egyptian Theater in Hollywood. It was a little more of a grindhouse affair than a proper presentation of Houdini's films, but it was fun and it was great to see Houdini on the big screen.

The screening was proceeded by a presentation by magician Mark Paskell. Mark kicked off the evening by doing a giveaway drawing for a magic lesson (given by himself), Houdini playing cards from the The Magic Apple, and a framed Houdini stamp with the viewer that allows you to see the hidden chains (I wanted to win that one -- didn't). He then proceeded to give a sideshow presentation, "Houdini on the Silver Screen", gleaned largely from Wikipedia and a bit flippant for my tastes. More background on the movies we were about to see would have also been welcome -- maybe let this movie literate crowd know to watch for Nita Naldi or reassure them that the somewhat tedious The Man From Beyond pays off with a genuinely exciting climax at Niagara Falls -- but this is Mark's talk, so...

The highpoint of the presentation (and maybe the entire evening) had to have been his showing of the 3 minute clip from The Grim Game. The good sized crowd audibly gasped when the planes crashed. This was the audience's first look at Houdini on screen and it went over wonderfully well. During the plane transfer I heard one young lady exclaim, "This is SICK!" (which I believe is a good thing). I look forward to the day when we are finally able to screen the entire movie and let it be the representation of Houdini's film work. 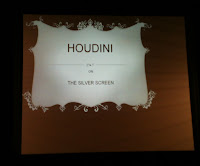 Mark closed his talk by playing the Houdini voice clip, which also seemed to captivate the audience. There was something very exciting about hearing Houdini's voice booming out across a large theater. He then escaped from a regulation straitjacket, which was good fun.

Then it was movie time! Now, I do have to give low marks to the American Cinematheque for choosing to show the Kino transfer of The Man From Beyond. This is the worst possible version of this film available. This is especially disappointing when they could have shown the beautiful restoration by Bruce Cardozo, which is readily available on DVD. The audience really didn't need to be any more challenged in watching this very old movie, and I'm surprised more effort wasn't put into finding the best possible version.

It also didn't help that the Egyptian's projector went black during the last moments of the Niagara Falls rescue sequence. While this was certainly irritating, it was also kind of funny and received a laugh when it snapped back during the very last scene, leaving the audience no way of knowing how Houdini rescued the heroine from the falls. Again, this gave the whole evening a definite grindhouse feel.

Most the audience left after The Man From Beyond, but the hardcores remained for Terror Island. It was worth staying. This movie certainly plays faster and is much more lively than Beyond, although the stereotypical "native" sequences can cause one to squirm a bit, so maybe it was a good call to play it second.

All in all, it was a real treat to see Houdini on the big screen, but next time I hope the American Cinematheque, or whatever organization elects to do a screening of Houdini's films, puts a little more effort into presenting the movies in their best light and historical context. Although maybe a somewhat shabby grindhouse giveaway double feature actually was the most historically accurate way to enjoy these movies. 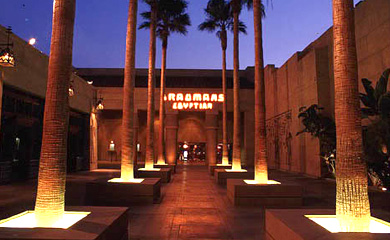