The aim of this series has been to focus on issues of Genii that have featured Houdini on the cover. From the time Genii was founded in 1936, these have numbered at least two per decade, and many have been Special Houdini Issues. That's why it was so surprising that after November 1975, Houdini vanished from the cover of Genii for the remainder of the 1970s and never once appeared on a cover in the 1980s! That's right, the '80s are a lost decade for Genii & Houdini. Well, kinda. 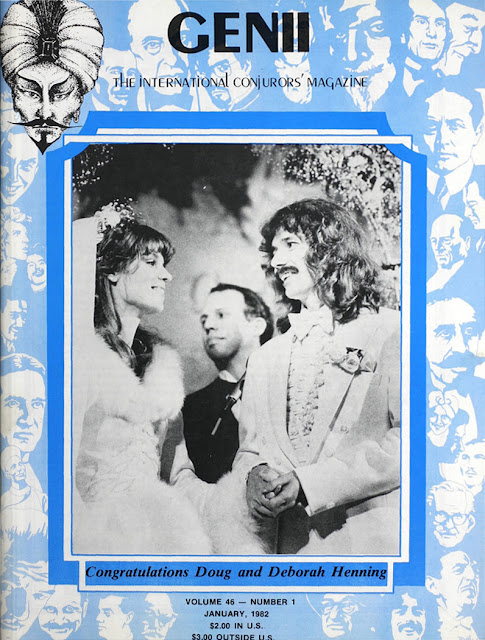 Technically, Houdini did appear on the cover of Genii in the '80s many times. That's because in 1982 Genii did a cover redesign that featured a background montage of famous magicians, including a nice image of Houdini (hopefully I don't need to point him out). But apart for this, Genii showed little love for the Master Mystifier during the "Me Decade."

So why did Genii snub Houdini throughout the 1980s? It's hard to know for certain, but as I noted with the October 1972 issue, a certain hostility toward Houdini seemed to emerging as Dai Vernon became part of Genii and the West Coast magic scene. While Vernon was happy to trade on Houdini's name for his own purposes ("The Man Who Fooled Houdini"), he dismissed him as a magician and sniped at him in his Genii column. Not that Vernon actively suppressed Houdini in Genii, but the environment he fostered was that real magicians should discount Houdini as a publicity seeker and instead emulate true craftsmen like...Dai Vernon! (It's an attitude that still exists today.)

But it could also be that there were no seismic Houdini events in the 1980s as there had been in the 1970s with a wave of books and tributes commemorating the 50th Anniversary of his death. In fact, the '70s were so Houdini packed, the magic world might have been suffering a bit of a Houdini hangover in the '80s.

Still, Houdini was missed. Many Houdini and magic fanatics--like myself--were born of the '70s boom, and Genii not producing even a single Houdini issue or cover to pull in these new, younger fans might have been a strategic mistake (even I let my subscription lapse). Newer magic publications like Hocus Pocus and Magicol happily filled the void, featuring Houdini on the covers of early issues, just as Genii had done with issue #2 when it was challenging the dominance of The Sphinx back in 1936.

However, the tradition of a Houdini Special Issue would be revived in the 1990s, and by a familiar champion.