Houdini wanted to jump handcuffed from the Woolworth Building

In 1914 Houdini was "seriously considering" jumping handcuffed from the Woolworth Building in New York City. At the time it was the tallest building in the world. Bill Mullins discovered the story in The New York Press, July 8, 1914. The article by Andrew Carson reads in part: 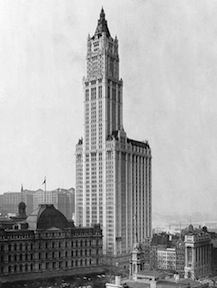 The other afternoon he was leaning against the back wall of the auditorium of Hammerstein's watching the bill. He was easy to approach and still easier to talk with. Houdini has a shrewd sense for publicity. He times his public exploits at moments when the interest is most apt to be aroused. He knows what will make news that the city editor will jump for. He has a keen sense for the spectacular. At present, for instance.

"I am trying to get a permit to jump off Woolworth Tower," said Houdini calmly. "I jump off in a parachute with my hands handcuffed together. When I reach the ground my hands are free. That makes a great story, doesn't it? Of course there's nothing especially wonderful or miraculous about it--but it's dangerous. And that looks well in print, 'Jumps Off Woolworth Building With Arms Handcuffed Together.'"

"No fear or foreboding at all?" I questioned inanely.

Houdini swept downward with his arm to emphasize his answer. He is short and stocky in build. Every muscle of his body has power and when he says a thing emphatically he says it very emphatically indeed.

"If you are afraid--you die," he said with conviction.


A handcuffed parachute escape was something Houdini mentioned at other times as well. In London he told a reporter that had wanted to leap handcuffed from a Wright Brothers plane and land in Piccadilly Circus. At another time he mentioned doing the stunt from the Eiffel Tower. But somehow he was never able to get permission, or figure out the logistics of such a stunt. Or maybe it was just a exciting idea to mention to reporters. Like Houdini says, it looks great in print.

Thanks to Bill for the find.
Written by John Cox at 10:59 AM