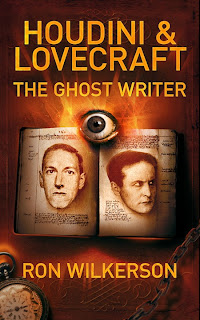 Good news for collectors. Houdini & Lovecraft: The Ghost Writer by Ron Wilkerson is now available as a paperback. The book was originally released only as an eBook.

According to the author's official website, the fictional book is a novelization of his own feature screenplay that finds Houdini and H.P. Lovecraft trapped in a mansion under attack by deadly paranormal forces.

The book is listed as "Volume 1", so hopefully this means we'll get more adventures of Houdini and Lovecraft.

Purchase the paperback edition of Houdini & Lovecraft: The Ghost Writer at Amazon.com (U.S.) or Amazon.co.uk (UK).
Written by John Cox at 7:35 AM