For those who don't know, David Blaine's latest stunt "ELECTRIFIED" is happening right now. David has been standing on a post inside a cage of electrified Tesla coils for 62 hours with another 10 hours to go.

One of the reasons I so dig these David Blaine endurance stunts is they are absolutely the kind of thing Houdini would be doing if he were alive today. Houdini was firmly headed in this direction with the Shelton Pool Test and especially the Summerfield's Test in the months before his death in 1926. The idea of seeing Houdini performing endurance tests, not escapes, would have become a regular event in New York City...just as it is now with David Blaine. 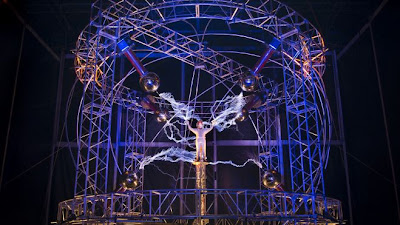 UPDATE: David made it! He also announced this would be the last endurance stunt that he would ever do. (!)
Written by John Cox at 8:25 AM