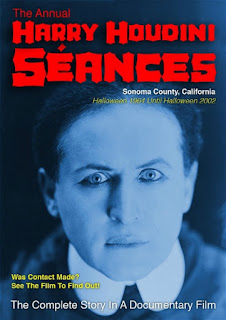 A new documentary about the Sonoma County Houdini Seances will play at the Boulevard Cinemas in downtown Petaluma on November 3, 2012. The film is called The Annual Harry Houdini Séances by filmmaker Tom Wyrsch. A Q&A will follow the screening.

The annual Sonoma Country Houdini Seances were organized by Petaluma Argus-Courier columnist Bill Soberanes, along with local residents Fred Daniels and Nahmen Nissen, from 1964 to 2002.

"As a kid, that was something that would really fascinate me," Wyrsch recently told petaluma360.com. "I used to wait for the Halloween issues of the Argus-Courier because I knew Bill would be writing about the séance. I'd run out and grab a copy just as it was being delivered. Every Halloween, that was a big deal."

"I went to a few of them and they were always really interesting and fun,” said Wyrsch. "What struck me was that they were done honestly. It wasn't a show or something done as a joke. They were serious about what they were doing. It's been so many years since those séances and it got me thinking I should do a documentary on them."

The seances were considered "official seances" thanks to Soberanes getting local magician William Allstrand, a personal friend of the Houdinis, to participate each year. Allstrand was said to have a coded message given to him by Houdini and his wife.

Click here to buy tickets to the November 3 screening of The Annual Harry Houdini Séances. For more on the film visit the Garfield Lane Productions website.

For more about Tom Wyrsch, read "Talking to the Dead" at petaluma360.com.
Written by John Cox at 3:33 PM