Following up on yesterday's post, Patrick Culliton has shared on Facebook his own photos of Houdini's original Metamorphosis trunk (taken by Rory Flynn) along with this story about how the trunk almost met its end. Saved by a power from beyond perhaps? I'll let Pat tell the story himself: 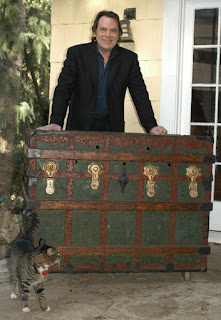 "Before I deployed to Vietnam in 1968, I moved everything I owned (Wurlitzer juke box, etc.) into my old bedroom at my parents house. Houdini's trunk wouldn't fit in the bedroom -- it blocked the dresser and my folks wanted to use the room as a guest room, so, reluctantly I moved the trunk around to a screen porch on the other side of the house. In January, 1969, I was in the Mekong Delta getting shot at, the trunk was on the screen porch, and a mudslide completely took out my old bedroom and everything in it. Had I or the trunk been in that room we wouldn't be here. That was only one of the scrapes that trunk and I got through during the 45 years."


Proof that this is Houdini's authentic sub trunk can be found in four terrific photos of Harry and Bess using this trunk in Bruce McNab's, The Metamorphosis: The Apprenticeship of Harry Houdini, due to be released by Goose Lane Editions on October 26.
Written by John Cox at 5:49 PM