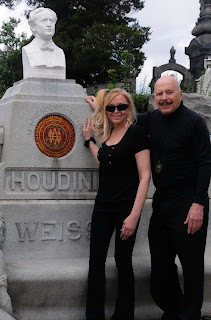 Dorothy Dietrich and Dick Brookz have announced that the Original Houdini Seance will be held at the Houdini Museum in Scranton, PA, on Halloween at 1:26pm. The event is open to the public with a $10 donation or more. It's free to any magic club member.

The Original Houdini Seance (not to be confused with the Official Houdini Seance which will be held in Fort Worth this year) traces its linage back to Walter B. Gibson. Gibson, who was Houdini's friend and ghost writer (and creator of The Shadow), was reportedly asked to carry on the annual seances by Bess Houdini. He handed off the tradition to Dorothy Dietrich before his death.

The Houdini Museum will also host an evening lecture at 7:00 by world renowned side show entertainer, magician and escape artist Harley Newman. The lecture is called Harley Newman 2.0, Harley on Steroids!, and will contain material not done on previous lectures.

Also, for the first time anywhere, the new full set of Houdini Trading Cards will be unveiled.

For more details on this year's Original Houdini Seance, visit the Scranton Houdini Museum website.
Written by John Cox at 9:26 AM