Having vanished from the cover of Genii for an amazing 18 years, Houdini returned in November 1993 with a true "Houdini Special Issue". Sharing the cover with Harry was the man responsible for reuniting Genii and Houdini, the mighty Patrick Culliton. 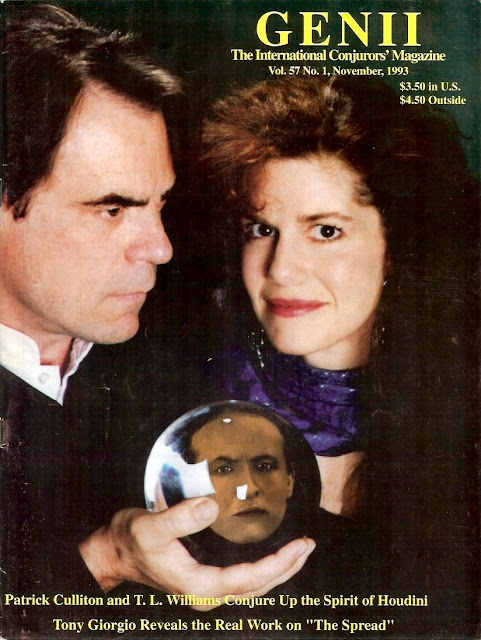 Patrick had suggested the idea of doing a Houdini special in November instead of October, noting that the very first Houdini Memorial Issue by The Sphinx came out in November 1926. While Genii was now being co-edited by Dante and Erika Larsen (Bill Larsen, Jr. passed away in February 1993), the 12-page Houdini section was complied and edited by Patrick and T.L. Williams. 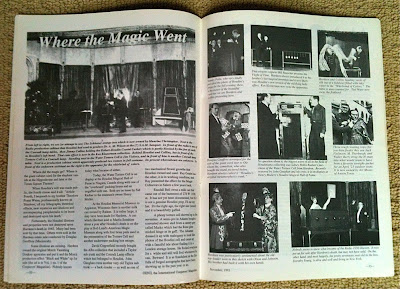 The Houdini section includes: "Houdini A Magician for the Ages" by Patrick Culliton; a handwritten "Outline for a Society Sketch" by Houdini; Houdini's short story Bahl Yahn the Strong Man; Houdini's own account of his aviation exploits, "Flight and Magic"; "Buried Alive", an article about Houdini's Shelton Pool Test by Patrick Culliton; and a terrific article by Patrick called "Where the Magic Went" tracing where many of Houdini's most famous props went after his death.

The Houdini section also includes a wonderful tribute to Manny Weltman by Patrick called "My Pal Manny". Manny was a major collector and the reigning Houdini expert at The Magic Castle. He had been the driving force behind the last Genii Houdini Special Issue in 1972. Patrick recalls today, "Manny was still alive. He was his usual grumpy self as he had told me not to write about him. He was actually very touched."

Manny Weltman passed away in May 1994.

While it was good to see Houdini back on the cover and in the pages of Genii, the 1990s would be a turbulent time for the family owned magazine. By 1998, when only three issues were published, there was a serious question as to whether Genii would even survive...