The "willfully eccentric film blog" Shadowplay has concluded their 15 week long Sunday Intertitle series looking back at Houdini's The Master Mystery. This was a terrific and frequently very funny scene by scene summation of Houdini's 1918 serial by someone who really knows and loves this stuff. I couldn't have done a better job myself. 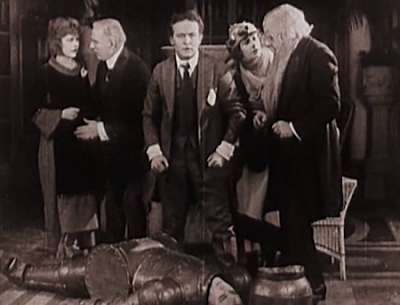 "It’s a combination of one of those Roman farces where everybody turns out to be everybody else’s lost son or daughter (which always makes me think of Beryl Reid’s reaction to such revelations in JOSEPH ANDREWS: “What Fucking Next?”) and the Reconciliation Scene from KING LEAR. In fact, with twice as many restored lunatic fathers and estranged daughters, it’s obviously twice as good as Shakespeare. And it has Houdini and a criminal robot to boot."


Click to read all of Shadowplay's posts on The Mastery Mystery
Written by John Cox at 7:41 AM