The Great Houdini reappears as an eBook 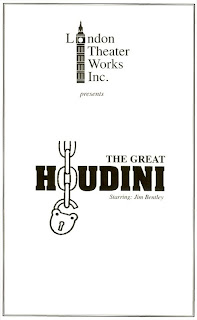 In 1999 The Great Houdini by Alan London played a limited run at The Stella Adler Theater in Hollywood. The London Theater Works production starred Jim Bentley as Houdini and Kim Lores as Bess. I was fortunate enough to see this play and I enjoyed it very much. I especially enjoyed seeing Jim perform the Milk Can -- the only time I've seen the Milk Can performed live (it's pretty harrowing).

Now you can discover (or rediscover) The Great Houdini as an eBook available on Amazon. Here's the description:

THE GREAT HOUDINI
A Play in Two Acts

The newspaper headlines are being barked, "Extra! Extra! Read all about it! Houdini dies! Death ends career of the King of Magic". At least that's what the headlines read. What they didn't tell you is that on this very day, the Eve of Halloween, as his body is being prepared for his final resting place, the irate spirit of Houdini wanders the stage of his last performance before his untimely death. He's not expecting much - after all he's dead. But a scruffy young runaway he encounters is not. The lad is evading a thug he swindled while performing a con. Houdini's last challenge is to unlock the young boys imagination and set him on the straight and narrow. He must do this in order for him to be united with his dearly departed mother, which for years he had attempted to do by attending séances. However, the boy has other ideas. Houdini takes the boy through his struggles from early childhood, to performance in seedy vaudeville shows, to meeting and performing tricks and escape with his wife, and finally leading up to his final performance. The boy finally learns from his mentor, thus allowing Houdini to be united with his mother. The boy turns out to be another prominent figure that is only divulged at the end (Orson Welles).

Speaking of The Great Houdini, check out the blog A Note From Paul Gross about the making of the props for this production. 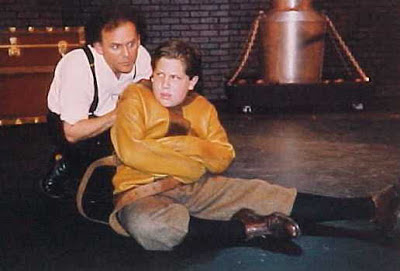