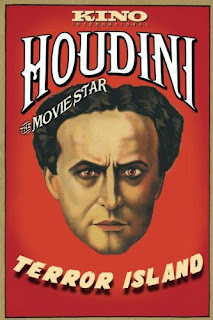 Houdini's 1920 silent feature film, Terror Island, is now available for streaming via Amazon Instant Video. I believe this is the first Houdini movie to be made available for steaming, which means you can watch it on computers, phones, and tablets.

The version offered here is from the 2008 Kino box set, Houdini The Movie Star, which collects all of Houdini's available silent films along with rare footage of his real escapes. The steaming page features this unique Kino Terror Island artwork.

It's kind of satisfying to see Houdini's movies being offered via the most modern methods of film distribution.