Bill Mullins over at the Genii forum has shared a very interesting discovery from a December 27, 1920 issue of the Gettysburg Times. This is an ad for what appears to be an unknown movie starring Houdini called The Marked Woman. Has Bill found evidence of a long lost Houdini film? 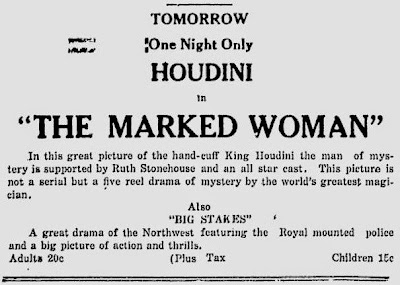 Maybe not. Bill suggests (and I concur) that this is actually Houdini's 1918-19 serial, The Mastery Mystery, recut into a 5-reel feature. The mention of supporting player Ruth Stonehouse is a giveaway.

Below is a second ad for The Marked Woman from a December 1920 Winona MN Republican-Herald. It shows even more cast members from The Master Mystery, including leading lady Margaret Marsh. However there are a few actors named here who are not in the Houdini serial. Certainly silent star Ruth Roland is not in The Master Mystery. So is The Marked Woman some kind of combination of the Houdini and Roland serials? 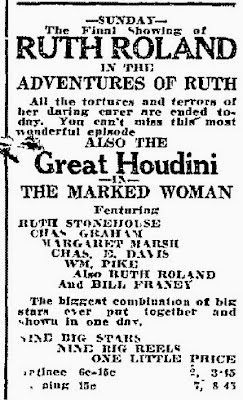 I suspect Houdini was unaware of The Marked Woman. The practice of recutting movies to sell as "new" attractions went on in the days of silent cinema. In fact, the only reason we have the famous plane crash footage from Houdini's The Grim Game is that it survived as one of these recut jobs -- in that case the footage was made into a short film called Desperate Chances.

UPDATE: The master mystery behind Houdini's pirated films.
Written by John Cox at 7:05 AM