The Handcuff King's blog: A night at the opera and a day in Liverpool 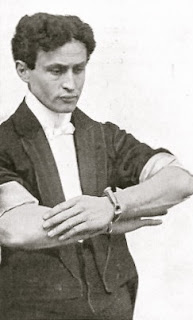 Houdini's letters and diaries reveal that he could be at times quite introspective and also a keen observer of people. He was able to express what he saw and felt quite well. Happily, he also had these moments while writing his column for the Dramatic Mirror.

Below are a couple of passages that reveal the inner Houdini. I love this kind of thing because while we know what Houdini did, it's rare to be able to get inside his head and see how he saw the world around him.

At last I have managed to see an opera here in Saxony, and at the Hof Opera House, which means Royal Opera House. I took in Fra Diavolo. The name makes me think of a "Loop the Loop" act, but it was nothing of the kind. The night I saw the opera the house was not well filled, and during the intermission to my astonishment I saw ladies in full evening dress unwrapping ham sandwiches from newspapers and calmly eating them in the vestibule. As all looked as if they belonged to the "400," it was a better sight to me than watching the opera. It looked to me like a small-sized comic opera in the vestibules to see all the well-dressed ladies eating their belegter brodchens, and they seemed to enjoy themselves.


While the above showed an amusingly observational Houdini, the following shows how he could also be introspective and even melancholy. It also suggests a man who might have been haunted by the fear of falling back into the poverty that he had escapes only a few short years before.

On December 5, 1904, Houdini writes from Brighton in the UK:

While walking in Liverpool I looked into a pawnshop and a large American eagle on top of a medal caught my eye. It was the once celebrated medal worth about $3,500, that was given to the minstrel man Sam I. Hague. It bears the inscription: "presented to Sam Hague by a few friends that know him. St. James Hall. Liverpool. May 20, 1875." It tells a mournful tale, lying there in the window, of a once famous minstrel. He has been dead a few years and always refused to part with this while living, but now that he has gone his widow has been forced to part with this once cherished trinket. Seeing this medal in the window brought back to my mind the medals that are pawned in New York with a well-known "uncle" in the Bowery, who displays with pride presentation cups, loving chains and championship prizes of all sorts. Many a time I have walked to this place and looked at the silent remembrances of past favorites and never have I forgotten the fact that "life is but and empty dream."


Ironically, when Houdini died, his own widow had money troubles and a healthy collection of trophies and prsenations cups from Houdini's storied career. But while Bess sold the house at 278 and part of Houdini's book collection, she held onto the trophies. Perhaps she knew all too well Houdini's fear of ending up a symbol of "life's empty dream" in the window of a Bowery pawn shop.

Coming next: Shipwrecked.
Written by John Cox at 9:41 AM