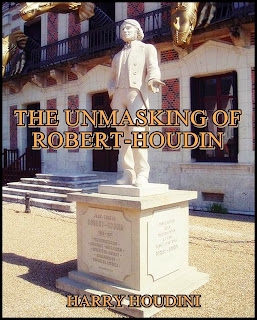 Houdini's controversial 1908 book The Unmasking of Robert-Houdin has been released for Amazon's Kindle. I believe this marks the first appearance of Unmasking as an eBook.

While Houdini's attack on Robert-Houdin as "the prince of pilferers" hasn't found many supporters over the years, the book is still an excellent history of pre-20th century magic with many rare illustrations.

The cover art for this new Kindle edition features the statue of Robert-Houdin in front of his home in Blois, France. This somewhat echoes the original cover which featured a bust of Robert-Houdin. I'd love to see this cover on a print edition.

Purchase The Unmasking of Robert-Houdin for the Kindle on Amazon.
Written by John Cox at 9:14 AM