History's Houdini will be 2-day event 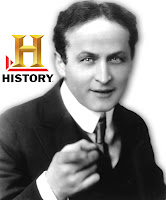 Ad sales president Mel Berning gave the A+E Networks upfront presentation at Lincoln Center on Wednesday night and officially announced their Houdini miniseries starring Adrien Brody. One piece of new information is that History plans to broadcast the miniseries over two nights. According to TV Guide:

Adrien Brody will also star as Houdini in a two-day miniseries about the escape artist. A premiere date was not announced.


Houdini is being produced for History by veteran TV producer Gerald W. Abrams. Read more about the project here.
Written by John Cox at 9:21 AM