Wimbledon holds The Seance, May 21-25

The Carlton Dramatic Society presents a new Houdini-themed play by Kristen McGorry, The Seance, at the New Wimbledon Studio in the UK, May 21-25. Here's a description: 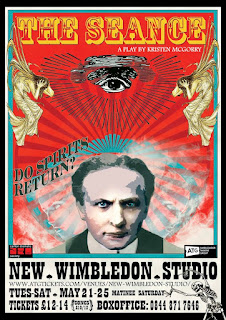 The Seance is a theatrical project that blurs the lines between reality and drama. Join Maliphant and his Dark Circus as they take you on a Spiritualistic adventure. An evening of magic, mind-reading and mystery, where we will attempt to answer the question that has raged for centuries. Is there life after death? Two friends sit on opposing sides of the debate. The world famous magician and medium-debunker Houdini, and creator of Sherlock Holmes and Spiritualist, Sir Arthur Conan Doyle. Together, with the help of medium Helena Fox, they embark upon an experiment. One last séance to conjure up evidence of something beyond the veil. But what begins as parlour tricks and sideshow illusion, soon takes a more sinister turn. Something wicked this way comes and it will not rest until the players have the proofs they seek. Can anyone survive the night's entertainment?

Tickets can be purchased now at ATG Tickets.

Thanks to Harry Houdini Mysteries author Daniel Stashower for the alert.
Written by John Cox at 8:53 AM