A new twist in Houdini vs. Houdina 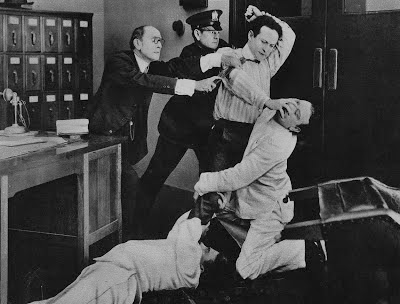 The story of Houdini's altercation at the Houdina Company in New York is well-known. It's a Rashomon-like tale in which, according to the owners, Houdini burst into their office wild-eyed, accused them of using his name, and started to break the place apart.

Houdini's version of the story is that he and his secretary, Oscar Teale, went down to the Houdina office to object to the use of the name because he was receiving their bills. He was threatened by four "Gorillas" and a scuffle broke out.

Said Houdini, "Two of the men started towards me and two were behind. Teale was thrown up against the wall, staggering. Had no idea I was smashing up chandeliers. All I thought was to save myself. I picked up a chair and acted in real life the scenes that I have portrayed before the camera." 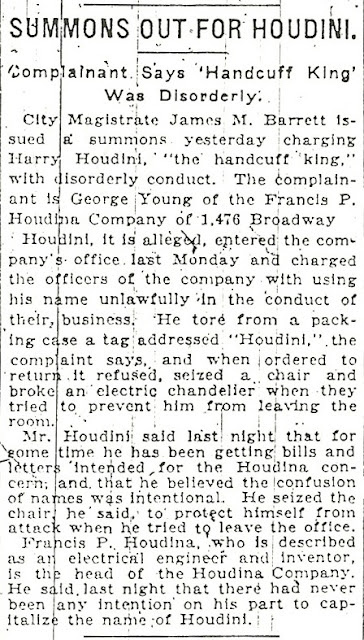 But now our friend Dean Carnegie at The Magic Detective has uncovered a remarkable third version of the story. Dean has been in contact with the son of Francis P. Houdina (a fictitious name) who says the entire thing was staged!

You'll have to visit Dean's site to read the details of this latest twist in our Rashomon tale, but this is a major discovery. My only reservation is that, as you can read above, the incident resulted in legal action. Sure, Houdini frequently staged events...but to involve the legal system in a publicity stunt? Seems even Houdini wouldn't have crossed that line.

Nevertheless, Dean's evidence is compelling and this is a true scoop, so click on over and read Clearing the name of HOUDINA at The Magic Detective.
Written by John Cox at 12:52 PM