Here are two recent additions to my Houdini book collection (which, ironically, use the same photo of Houdini on their covers). While maybe nothing new to hardcore Houdinites, these are both fairly uncommon books, so I thought I share these finds. 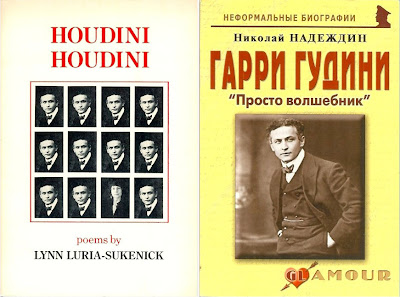 First up is Houdini Houdini, a book of poetry by Lynn Luria-Sukenick published by the Cleveland State University Poetry Center in 1982. A few of theses poems appeared in other publications, including the more common, Houdini, a chapbook published by Capra Press in 1973. But Houdini Houdini collects all of Luria-Sukenick's Houdini-inspired poetry. I've been looking for this one for quite a while. My search ended thanks to the good folks at Artisan Books & Bindery.

Next up is a book that is entirely new to me. This is a Russian Houdini biography by Nicholas Nadezhdin published in 2010 by Major. This is not a translation of an existing Houdini biography (for example, Russian Silverman), this book is original to Russia. The title translates to Harry Houdini: "Just a wizard." What new findings might be contained in these pages? I don't know because it's all in Russian!

"Just a wizard" is jam-packed with photos. All of the photos are familiar and appear to have been collected largely from the Library of Congress online archive. However, there is a shot on page 153 of Houdini and Bess with Sir Arthur Conan Doyle that I'm not sure I've ever seen before.

Be sure and check out WILD ABOUT HARRY's Bibliography for a complete (as possible) list of books about our favorite "Wizard."
Written by John Cox at 7:45 AM