Here's a nice paused moment from the 1953 movie Houdini in which star Tony Curtis points to a collection of real Houdini artifacts and Hollywood mock-ups. 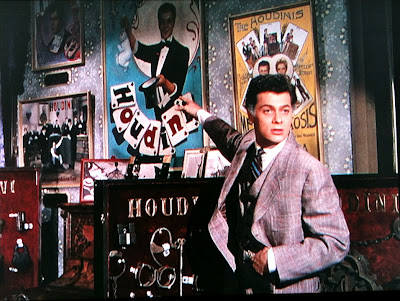 "Everybody knows who I am, Mama. Look at those!"


The yellow Metamorphosis poster behind Curtis is based on a real woodcut The Houdinis used early in their career. A mock-up King of Cards poster is in the upper left corner. Below that is a photo poster of Curtis/Houdini emerging from a safe based loosely on Houdini's Slander in Germany litho. The black and white photos on the table are real shots of Houdini's overboard box and suspended straitjacket escapes in New York. The display cases up front were made for the film but contain real Houdini handcuffs from the Dunninger collection.

UPDATE: I've turned the above shot into my first meme and posted it to the WILD ABOUT HARRY Facebook page. Please give it a look, like, and a share.