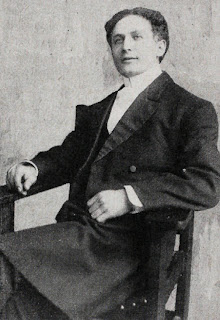 I'm going to conclude this series with some advice from Houdini for all you American singers, comedians, magicians, jugglers, loopers, hoopers, ventriloquists, cakewalkers, animal trainers, clay modelers, contortionists, and, yes, even escape artists, who are looking to make their names and fortunes in Europe.

I arrived safe and sound in England and walked around the streets of London so as to become accustomed to the foggy air. While strolling about Leicester Square, I discovered quite a few "shipwrecked" American acts. When I say "shipwrecked," I mean acts that hail from America that failed to obtain a prolongation of contract, or that came over without being booked. I think that it is only fair and just to let Mirror readers know that you have to make good in England, just the same as in any other country, and if you have a hankering to come over and cut your "capers," you should also be prepared to "do or die." Out of respect and good fellow-feeling the failures are never mentioned, and you only hear of the acts that have made good. So if you wish to come over to England, it is a good idea to have some agent book your act up for a run of six or eight months, and then you don't have to make good. You will work your contracts, and that is your finish, as an English contract is almost as good as so much money.


Houdini knew first-hand the hazard of being "shipwrecked" in England. Legend says Houdini and Bess gambled on making it in Europe and set out with no bookings and only $20 cash in their pockets. But in truth, the European trip was the idea of Martin Beck, Houdini's new manager, who had successfully shaped Houdini's act and booked him on his Orpheum vaudeville circuit in 1899.

Beck entrusted Harry's advanced European bookings to an international agent, Richard Pitrot, was supposed to travel with Harry and Bess to England. But Pitrot stood them up on the dock, and when Harry and Bess landed in the UK, they found that no contracts had been secured. They were "shipwrecked."

It took a handcuff escape at Scotland Yard (maybe true) and several auditions (definitely true) to convince C. Dundas Slater, the manager of the Alhambra Theater in Leicester Square, to give "The Handcuff King" a trial run.

The rest is history. 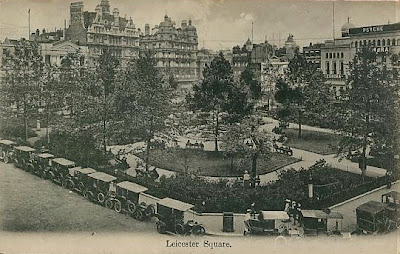