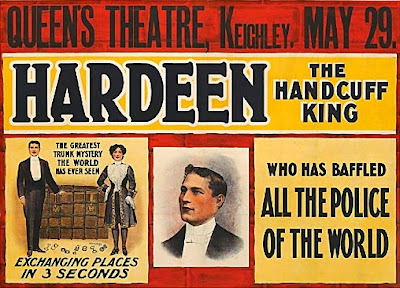 While researching my Handcuff King's blog series (watch for the final installment, "Shipwrecked", coming soon), I came across two curious items in Houdini's Dramatic Mirror column that I thought I'd single out here for closer examination.

The first involves his brother, Theo. Hardeen, whom Houdini set-up in show business during this time. In his April 29, 1905 column, Houdini writes:

Theodore Hardeen is in Paris and shortly returns to England. He has separated from his partner, and will in the future work alone.


Hardeen had a partner?

It's possible Houdini is referring to Hardeen's original female assistant, Miss Trixy, who worked with Hardeen in his version of Metamorphosis. As with the rest of his act, Houdini supplied Hardeen with "Miss Trixy" (a name Houdini would use again for a female escape artist he set-up in Germany). Miss Trixy can be spotted on the early Hardeen poster above. If we believe this image, it looks like not only did she play Bessie's part in Metamorphosis, but she also wore the same costume.

The next concerns a favorite topic here at WILD ABOUT HARRY, lost posters. On March 5, 1903 Houdini writes from Hanover, Germany:


What litho could Houdini be talking about here? I can't think of any Houdini posters that have a small American flag in the corner. There is the poster below (from Ken Silverman's Houdini!!! The Career of Ehrich Weiss) with the Great Seal of the United States in the corner. But because this poster depicts his Washington D.C. jail escape in 1906 (in which he escaped from the death row cell of presidential assassin Charles Guiteau), it can't be the poster Houdini is talking about in 1903. 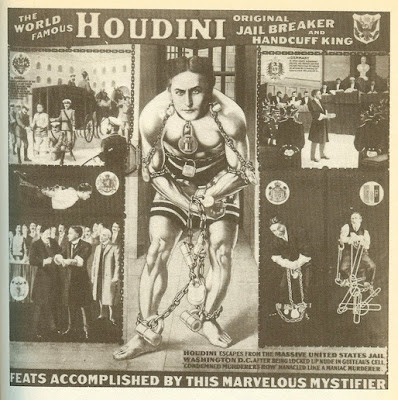 So we have evidence of a lost Houdini poster, made in 1903, possibly in Germany. Let the search commence!
Written by John Cox at 9:01 AM