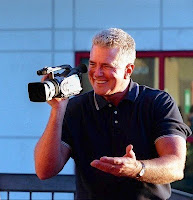 I loved Huell Howser and was deeply saddened when he passed away in January at age 67. For those who don't know, Huell Howser was a Southern California institution with his local PBS programs California's Gold and Visiting. His folksy and friendly manner was his signature (as was his tendency to find the most mundane things "amazin'!"), and his low-tech but always interesting and relentlessly positive shows were true comfort food TV. I really miss Huell.

In 2006 Huell visited the workshop of top illusion builder John Gaughan in Glendale, California. It was episode #1031 of Visiting and was simply called Magician.

During Huell's visit he encountered two pieces of Houdini apparatus. The first was John's beautiful reproduction of Houdini's original Water Torture Cell. Unfortunately, John did not identify the cell as being Houdini's most famous escape. Instead he only called it a "stage illusion" for a "magician." This is a shame because Huell -- who was once utterly captivated by a dog that eats Avocados -- would have certainly had a strong reaction this this amazin' piece of magic history. Instead, Huell didn't really give the cell all that much attention.

The only reason I can think that John wouldn't explain the significance of the cell is that this might have been during the time there was some controversy over the existence of the reproduction. Perhaps John didn't want to draw too much attention to the cell.

However, later in the show, Huell did spot the name of Houdini on a trunk in John's collection and was instantly drawn to it. Once again John didn't really provide much information. Perhaps it's just the nature of an illusion builder to be the keeper of secrets.

You can see both Houdini-Huell moments in the video clip below from the WILD ABOUT HARRY YouTube Channel. Enjoy.