Back in January The Sun reported that the Discovery Channel was shooting a "Houdini documentary" in Dublin, Ireland. Turns out it was actually an episode of the reality show, Baggage Battles, that featured a pair of Houdini handcuffs. 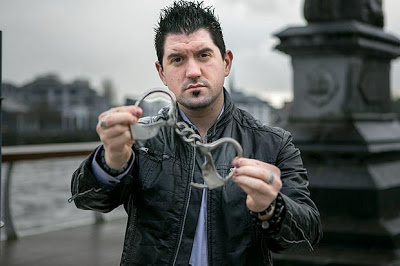 Escape artist Steve Spade, who was brought in as the Houdini expert, wildly overestimates the cuffs' value at $10,000-$20,000. But all this was faked anyway. We know from the original Sun story that the show purchased the handcuffs at an American auction along with the Hardeen paperwork. They were not discovered in lost baggage as portrayed here. And the whole thing about Houdini having a "52 second record" of escaping from the 100 foot rope tie is also total fiction. But that's "reality" TV for you.

Thanks to Harry Houdini for the tip.
Written by John Cox at 6:04 AM