Tim Prasil, a writer who specializes in the supernatural and sci-fi ("and a bit of humor"), has posted to his blog a new installment of his Vera Van Slyke: Help for the Haunted series called "Houdini Slept Here". This clever short story series purports to be the memories of Prasil's ghost-hunting great-grandaunt, Lucille Parsell, and her companion, Vera Van Slyke (a sort of female Holmes and Watson of the paranormal realm). As you can guess from the title, this latest story features Houdini. Says the author: 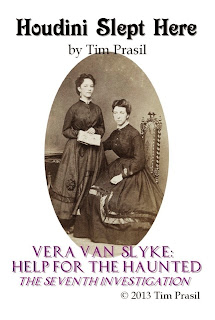 Lucille Parsell (a.k.a. my great-grandaunt, Ludmila “Lída”Prášilová) seemed hesitant to tell this story. Frankly, I had some reservations, too. It does not present Mr. Houdini in the most flattering stage light, after all. But there is evidence to support the claim that The Handcuff King had trouble keeping his hands to himself — despite his being married.

In this month’s story, Houdini finds himself threatened with blackmail for an earlier indiscretion — and haunted by it. Can Vera Van Slyke help him escape from the shackles of his past?


"Houdini Slept Here" is very entertaining short story with several inside references that Houdini buffs will enjoy. The story takes place in 1905 and some of the action is set inside 278. Yes, it does paint Houdini as being a bit, um, romantically adventurous, but it's all in good fun.

Follow the link on this page to download "Houdini Slept Here" in .pdf, .epub. or .mobi formats.
Written by John Cox at 10:35 AM